“So if you want to treat me like a stupid farmer, OK, that is the Pallister government's choice.”

I supported the Progressive Conservatives. I have known Blaine Pedersen for a while, and know Ron Schuler from the German Society of Manitoba. At least I thought I knew them and their party.

The Bipole lll landowners’ committee and CAEPLA have tried to communicate with Manitoba Hydro for years now. We have emailed, phoned, tried to talk and confronted them on the steps of the Legislature.

Despite our best efforts to get Hydro to come to the negotiating table, we were not treated well, and ultimately our land was expropriated.

So, too bad for the farmers, because we generally do not vote for the NDP—that was the government’s attitude.

Now with the new Pallister government, no change—Manitoba Hydro still refuses to meet with our chosen negotiator.

Since when do I live in a communist province?

Hydro believes they are above the law, they are freaking bullies and everybody knows it.  But if the abuse doesn’t happen in your backyard, it seems no one cares.

Hydro stole my land. They “acquired” it at a bargain price. The credit union says today my land is worth $4,200 per acre—easily. Hydro offers me $2,200. Hydro says they will do all the protocol regarding bio-security—BS again.

I have been watching exactly what they have been doing on my land. Hydro hires security for themselves and bullies farmers. They force bogus easement agreements on us, expecting us to accept liabilities from towers we never asked for.

And the BS from Manitoba Hydro never ends. The bullies intend to bulldoze their way through the very centre of my farm. I was in Minnesota this past summer and guess what? Their huge towers (just like ours and bigger) were right beside the interstate! My, what a concept. But not here in our province—now we will have to work around the poles.

So if you want to treat me like a stupid farmer, OK, that is the Pallister government's choice. They have chosen to continue bullying farmers, people who faithfully voted for them. The party in power may have changed, but the NDP policy of land theft hasn’t.

If I could, I would sell my farm in two minutes and get the hell out. But everyone knows, the farmers cannot just up and move their business—because our business is the land itself.

My neighbours and I want a new law in Manitoba. One that guarantees our property rights. Expropriation favours the government, not landowners.

Because of the current laws in this province and the Crown monopoly, every lawyer in this province is too busy kissing the ass of Manitoba Hydro. And when we join CAEPLA, the government—including the supposedly “new” Pallister government, refuses to recognize our legal agent.

A message to the Pallister government: Do not expect anything nice from me anymore. 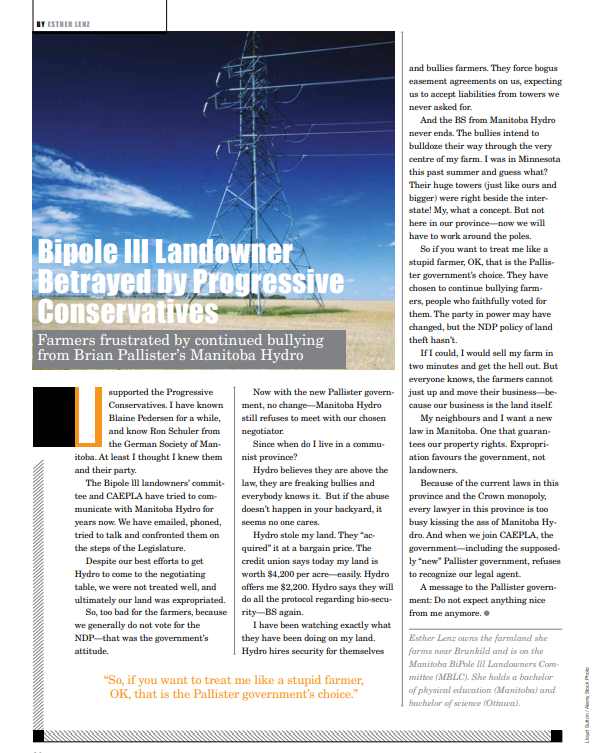 Esther Lenz owns the farmland she farms near Brunkild and is on the Manitoba BiPole lll Landowners Committee (MBLC). She holds a bachelor of physical education (Manitoba) and bachelor of science (Ottawa).