"This will impact not just landowners on whose property the Bipole towers are constructed, but hundreds more farmers whose land is adjacent to the line."

For years, Manitoba landowners and taxpayers have been puzzled by the provincial government’s stubborn insistence on forcing Manitoba Hydro’s newest transmission line, Bipole III, down the western side of the province. On almost all fronts — economic, environmental, landowner rights and First Nations relations — the longer Western Bipole route comes out at best as a draw when compared to the 500-kilometre-shorter route east of Lake Winnipeg. Financially, the western route is mind-bogglingly worse.

So why does the government persist with a strategy that costs ratepayers billions more than needed and forces hundreds of farmers to turn over their property to Manitoba Hydro? To understand this ill-conceived decision, the route needs to be put in the broader context of Manitoba Hydro’s risky development plan and the provincial government’s quest for short-term, allegedly “stimulative” economic growth.

Spurred by the Manitoba government, Hydro is spending billions on three new projects that are geared toward exporting power to the United States for many years. These projects are a new hydroelectric plant, the Keeyask dam, and two transmission lines needed to carry that power— the Bipole III and Manitoba-Minnesota transmission lines. The projects will cost $11 billion, the bulk of which will be incurred from 2015 through 2018.

In each of those four years, Hydro’s spending on these three capital projects equals or outstrips projected economic growth. In other words, if Hydro’s projects are delayed or cancelled, Manitoba’s economic growth in any of the coming years could fall substantially, or even be eliminated.

While the figures are projections and may change, they highlight the fact that Manitoba’s economic growth in the next few years is strongly dependent on constructing these three hydro projects.

This explains why Hydro continues to forge ahead with the Western Bipole III route. Shortening the route by 500 km would shave hundreds of millions of dollars off the project’s price tag and, by extension, hamper economic growth in the next few years. In fact, just delaying the project could cripple economic growth and employment in the short term, at exactly the same time the provincial government wants to boast about Manitoba’s economic record.

This ill-advised strategy may also explain Hydro’s decision to refuse any collective negotiations with hundreds of landowners who voluntarily united to ensure fair and equal treatment by the Crown corporation. Good-faith collective bargaining may have slowed the project, again putting at risk Manitoba’s GDP and job-growth figures.

While all Manitobans will pay a long-term price for this bungled Hydro project, a small group of citizens will pay far, far more: the hundreds of agricultural landowners who are in the unfortunate position of lying in the path of the longer Western Bipole route. Forced expropriation of thousands of acres of farmland — very likely at a price far lower than its true economic value — will permanently decrease their ability to earn a living from their farms.

Expropriating strips of land from within larger fields limits the ability of landowners to effectively manage crops, which will increase the chance of lower yields. For example, farmers will lose the ability to aerially apply crop inputs on thousands of acres of farmland along the Bipole III right-of-way.

This will impact not just landowners on whose property the Bipole towers are constructed, but hundreds more farmers whose land is adjacent to the line.

The Bipole III Coalition estimates the economic impact of just this one restriction to be in the billions of dollars over the lifetime of the Bipole line. By comparison, Hydro initially planned to spend roughly $35 million on compensation costs just to landowners whose land the Bipole line transects. No tower? No compensation.

Landowners also face additional risks with weed and disease control due to Hydro’s need to access the Bipole III line. Diseases like clubroot in canola have devastating consequences on crop production and are easily transferred on equipment that is not properly cleaned. With more Hydro equipment crossing their land, the risk of spreading new diseases or weeds to their fields increases substantially. This is a risk that Hydro seems unwilling to take seriously.

Manitobans understand that sometimes sacrifices must be made for the greater good. Many landowners have done just that during major floods in the past decade. But the Bipole III land expropriation isn’t for the greater good, it’s to achieve the Manitoba government’s proclaimed goal of immediate economic growth — regardless of the cost. For a group of southern Manitoba landowners, the price will be devastating. 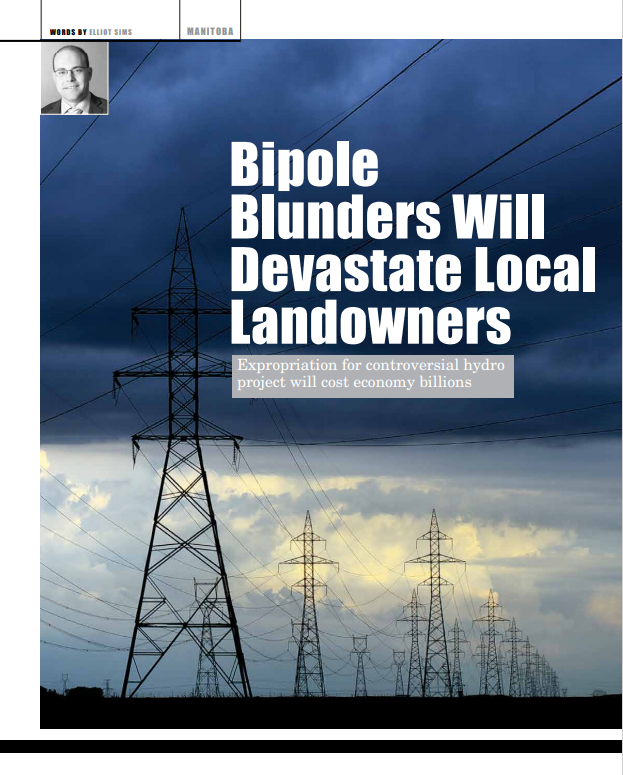 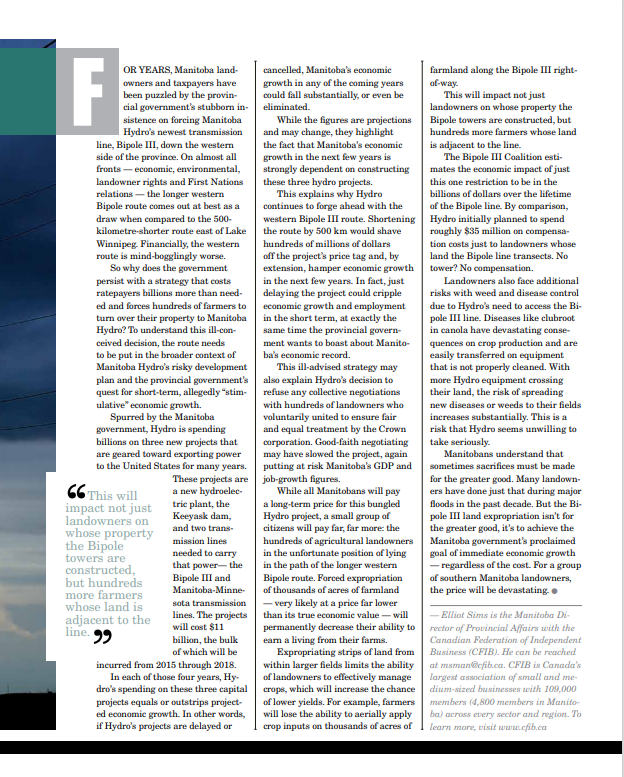 — Elliot Sims is the Manitoba Director of Provincial Affairs with the Canadian Federation of Independent Business (CFIB). He can be reached at [email protected]. CFIB is Canada’s largest association of small and medium-sized businesses with 109,000 members (4,800 members in Manitoba) across every sector and region. To learn more, visit www.cfib.ca