If the Biden White House succeeds in shutting down Line 5 — a vital conduit Enbridge has already promised to replace — Canadian farmers will not only see the price of fuel rise, but will experience a rail backlog and bottleneck like nothing seen before in history.

Despite approval ratings in the toilet, President Biden and his administration are reportedly exploring the closure of yet another pipeline in a bid to shift the US away from fossil fuels and appease environmental activists.

The move - shutting down the Line 5 pipeline which links Superior, WI to Sarnia, Ontario, would cost tens of thousands of US jobs, billions of dollars in economic activity, and further exacerbate energy shortages and price increases hitting lower-income Americans the hardest, according to a Thursday letter from 13 House Republicans led by Rep. Bob Latta

According to the letter, the closure would affect workers across "Ohio, Michigan, Wisconsin, and the region," and would place the environment at greater risk "due to additional trucks operating on roadways carrying hazardous materials."

Line 5 is part of a network of oil pipes which move approximately 540,000 barrels per day from western Canada to Escanaba, Michigan.

"Furthermore, as we enter the winter months and temperatures drop across the Midwest, the termination of Line 5 will undoubtedly further exacerbate shortages and price increases in home heating fuels like natural gas and propane at a time when Americans are already facing rapidly rising energy prices, steep home heating costs, global supply shortages, and skyrocketing gas prices."

This comes less than two weeks after the White House begged OPEC to increase oil production amid 'supply issues' and soaring energy prices.

It also comes after a weekend which started out with US Energy Secretary Jennifer Granholm scoffing at the notion of increasing domestic oil production...

...and ended on Sunday with her warning that Americans should expect to pay higher costs to heat their homes this winter - telling CNN's "State of the Union":

"This is going to happen. It will be -- it will be more expensive this year than last year," adding "We are in a slightly beneficial position, well certainly relative to Europe, because their choke hold of natural gas is very significant. ... But we have the same problem in fuels that the supply chains have, which is that the oil and gas companies are not flipping the switch as quickly as the demand requires."

According to Jason Hayes, director of environmental policy at the Mackinac Center for Public Policy, Biden's energy policies and potentially shutting down Line 5, is "just one more example of being divorced from reality."

"They're planning to power an industrial nation like the United States on solar panels and wind turbines," Hayes told Fox News.

"I hope it doesn't end like this, but where I see it going is unfortunately the same thing that happened in February in Texas: People freezing in their homes," he continued. "Most of the time when it's extremely cold or there's a real bad polar vortex situation, typically it's pretty cloudy and there's not a lot of wind."

Environmental groups and Native Amerian tribes, meanwhile, claim that a potential oil spill from the 70-year-old pipeline could devastate the Great Lakes and Michigan's coastal economies.

"Given the strength and oscillation of the currents, over 700 miles of Lake Michigan and Huron shoreline would face serious contamination" in the event of a spill, wrote a group of 12 tribal nations in a Nov. 4 letter to Biden. "In contrast to Canada’s vocal support of [pipeline owner] Enbridge, and despite what we understand to be the Governor’s requests for help, your Administration has thus far been silent regarding Line 5."

All this means that Biden, who promised at the COP26 climate talks that the United States would be “hopefully leading by the power of our example,” is facing the sort of cold, hard political decision that such grand climate ambitions can force on a country that is the world's top oil and gas producer, said Kevin Book, managing director at energy consulting firm ClearView Energy: Either keep the pipeline in place and disappoint progressives, or revoke its permit and hand Republicans fresh ammunition just after they shellacked Democrats in Virginia and other state elections.

"When fuel prices are high, it may not matter what project gets stopped so much as the White House is seen stopping it," said Bock. "Politically speaking, anything that could get in the way of the propane supply ahead of winter could play badly in Midwestern swing states."

Do they even care at this point? 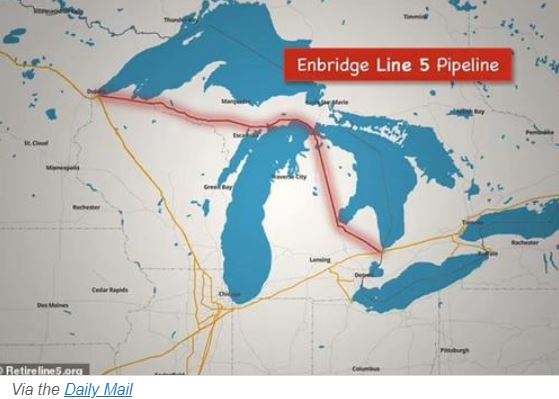