The dark history of expropriation in Canada

“Canada has the most arbitrary system of expropriation in the whole of the civilized world.”

— JUSTICE THORSON, President of the Exchequer Court in 1959

When Niccolò Machiavelli advised his Prince to “abstain from taking the property of others,” he also gave this warning: “Pretexts for confiscation are never wanting, and he who begins to live by rapine will always find some reason for taking what is not his.”

The Princes of today have strayed far from his advice, with the predicted results. The slimmest of pretexts—a big box store, a cinema, a parking lot—now excuses many a taking of private property.

Although expropriation—the taking of private property without the consent of the owner—is one of the most extreme uses of government power, Canadian governments have almost complete discretion over when they resort to it. Governments often justify this violation of their citizens’ common-law property rights as being necessary to carry out public purposes. But concepts as nebulous as “necessity” and “public purpose” provide no protection for landowners. Expropriations that serve private rather than public interests, and those that are unnecessary, have become commonplace. Expropriation is used as a convenient tool to reduce property acquisition costs for favoured industries.

In the 17th century, the famous English jurist Edward Coke wrote, “A man’s house is his castle,” adding (in Latin), “One’s home is the safest refuge to everyone.” Coke’s legal treatises are foundational documents of the common law, and this particular maxim continues to influence modern courts.

Canadian Supreme Court Justice Claire L’Heureux-Dubé wrote in 1991, “Both the legislator and society as a whole recognise the truth of Edward Coke’s adage ... Property rights are considered fundamental in our democratic society.”

Property rights long shielded homeowners not only from assaults by their fellow citizens but also from assaults by governments themselves. In a speech to the British House of Commons in 1763, statesman William Pitt the Elder vividly illustrated the strengths of the property rights protection: “The poorest man may in his cottage bid defiance to all the forces of the Crown. It may be frail—its roof may shake—the wind may blow through it— the storms may enter—the rain may enter—but the King of England cannot enter—all his force dares not cross the threshold of the ruined tenement!”

But in fact, the forces of the Crown could expropriate the ruined tenement. While expropriation is not part of the common law, it has existed for as long as kings and parliaments have decreed it. References to expropriation can be found in the Old Testament, in inscriptions from ancient Greece and in special statutes of the Roman Empire. The practice became commonplace in England with the expansion of railways in the mid-19th century, and Canada quickly adopted England’s laws.

John Morden
“In Canada, few hurdles have been put in the way of expropriating authorities exercising their powers as they see fit."

Federal and provincial parliaments can confer the power to expropriate on whomever they please. A 19th-century work on expropriation explained that, under the principle of parliamentary supremacy, “The only guide to what Parliament may do is what Parliament has done.”

Or, as one law lord famously wrote, “The Legislature is supreme, and if it has enacted that a thing is lawful, such a thing cannot be a fault or an actionable wrong.” An Ontario justice was even more pointed: “The Legislature within its jurisdiction can do everything that is not naturally impossible, and is restrained by no rule human or divine....The prohibition ‘thou shalt not steal’ has no legal force upon a sovereign body.”

Nonetheless, no entity can expropriate without being explicitly empowered to do so by federal or provincial legislation. As one B.C. justice explained, “The right to seize and enter upon another’s land is a legislative concept. It runs against the general common law principle colloquially stated to be that ‘a man’s home is his castle.’ It is the deprivation of proprietary rights.”

Justice L’Heureux-Dubé made the same point, citing a weighty tome on expropriation: “The right to expropriate, being an unusual and exorbitant right, must be found in the express words of a statute for the right is never implied.”

Unfortunately, in Canada, there has been no shortage of statutes conferring the power to expropriate. Nor have those statutes placed meaningful limits on what those powers can be used for. As lawyer John Morden (who would later become Associate Chief Justice of Ontario) explained, “In Canada, few hurdles have been put in the way of expropriating authorities exercising their powers as they see fit.”

In 1930, the Exchequer Court of Canada noted, “The powers granted to the Minister by the [Expropriation] Act seem to be unlimited,” and that the Minister’s judgment that private land was necessary for a public work was not open to review. The court made a similar finding in 1946: The mere filing of an expropriation plan “shall be deemed to indicate that in the Minister’s judgment the land is necessary for the purpose of a public work.... His judgment is not open to review by the Court.”

Indeed, the federal Expropriation Act came in for sharp criticism from the President of the Exchequer Court in 1959. Justice Thorson wrote, “I have frequently called attention to these provisions of the law and stated that Canada has the most arbitrary system of expropriation in the whole of the civilized world. I am not aware of any other country in the civilized world that exercises its right of eminent domain in the arbitrary manner that Canada does. And, unfortunately, the example set by Canada has infected several of the Canadian provinces in which a similar system of expropriation has been adopted.”

Elizabeth Brubaker is executive director of Environment Probe and author of Expropriation in Canada: Discretion Masquerading as Law. Visit environmentprobe.org 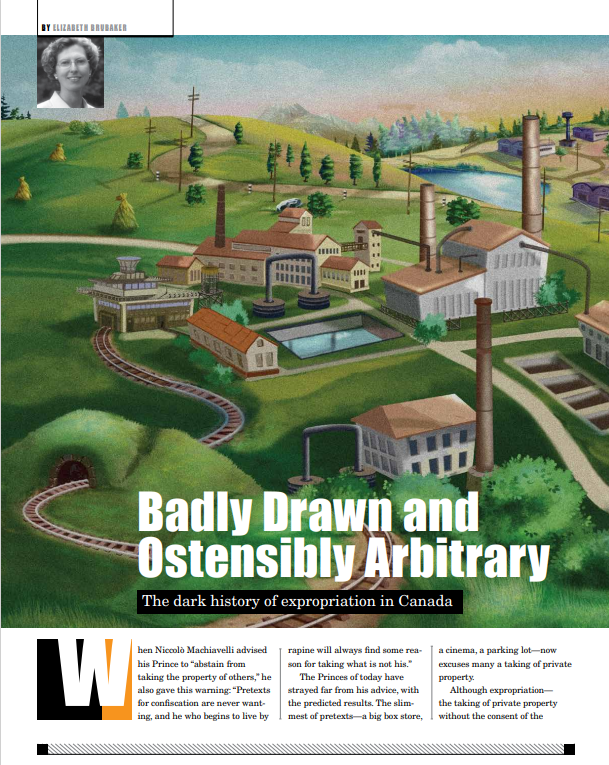 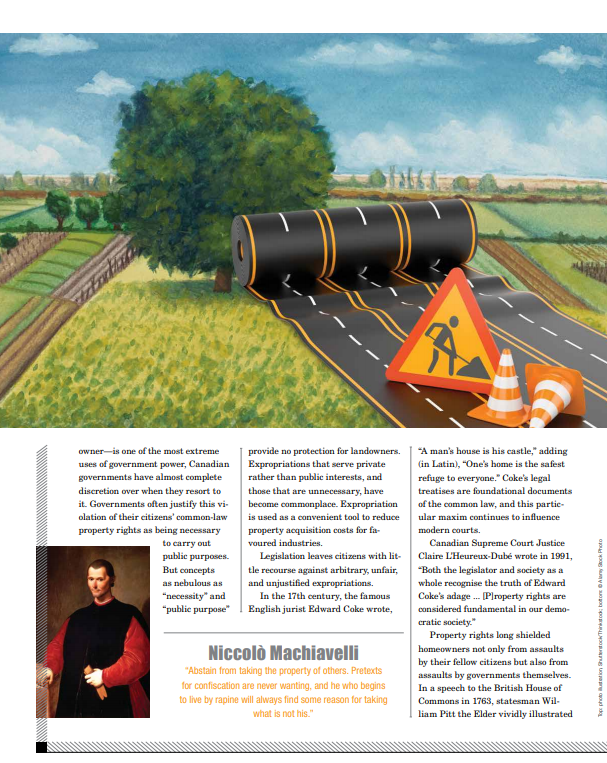 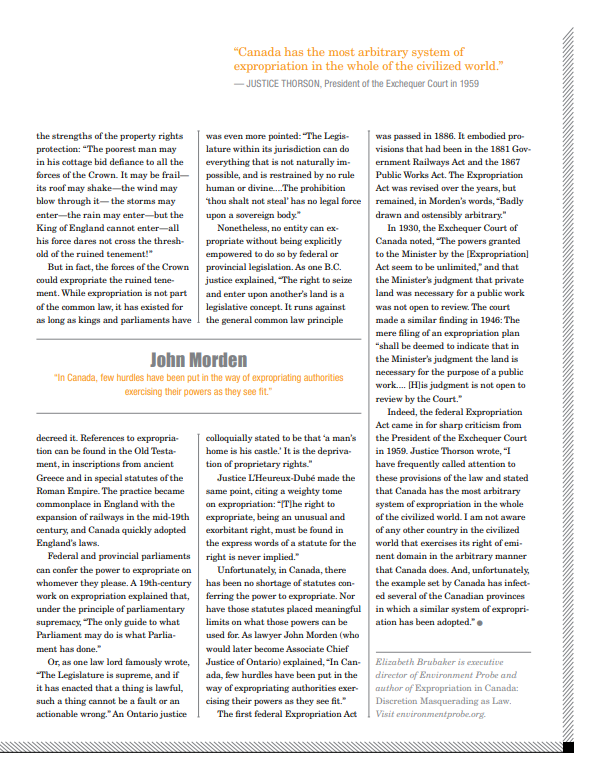