Are We At Peak Regulation?

"We do not have adequate property rights and we do not uphold the legitimate primacy of the real stakeholders in pipeline negotiations."

Just months after the BP oil spill in 2010, Terence Corcoran penned a piece in the National Post titled “The new oil risk: peak regulation.” He explained, “Peak oil theorists believe the world is approaching a point where consumption is exceeding the world supply of oil, a theory that has many holes but which could become a reality if governments begin to impose regimes that prevent the finding of new reserves. […] The way to make that prospect of peak oil a reality, of course, is to regulate oil in ways that prevent reserve development.”

Last October, TransCanada President and CEO Russ Girling announced the company’s cancellation of its $15.7-billion Energy East pipeline proposal “in light of the project’s inability to reach a regulatory decision.”

The mood is somber in my hometown of Calgary. The burdensome regulations on the industry that fuels not only the Alberta economy but Canadian prosperity is the talk of the town in cafes bustling with frustrated citizens who have vacated the office towers.

With a cowardly socialist government in Alberta, it took the premier of Saskatchewan, Brad Wall, to express the malaise of project after project, prospect after prospect being killed.

“Something needs to change,” Wall wrote in October. “For the west to continue on like this in our federal system is the equivalent of having Stockholm syndrome. [… Prime Minister Justin Trudeau’s] actions and his government’s actions may well have some westerners wondering if this country really values western Canada, the resources we have, and the things we do to contribute to the national economy and to quality of life for all.”

The allusion to Stockholm syndrome is apt. I recall a news story last fall about the 100,000 jobless energy workers. It profiled Dennis Agbegha, a 38-year-old with a graduate degree in petroleum geoscience from the U.K. who worked for Exxon Mobil Corp. After being laid off and applying for hundreds of new positions, the best he could get was a meagre position at a Crown corporation.

And when geologist Ryan Lemiski was laid off, he decided to pursue further studies hoping to eventually work in “the green industry.”

It is truly sad when, having been taken hostage by the regulatory regime, formerly productive workers join the forces of their captors and succumb to the demands of political mirages rather than meeting the authentic market demand of Canadians for efficient, affordable energy.

The term “regulate” is related to the word “rule,” and “to regulate” also means “to govern by restriction” and this seems to be the main approach of the National Energy Board and other regulatory bodies. Instead of regulation being a framework for action, providing the rules of the game (the term “petroleum plays” connotes a sense of prospect and potential), “regulation” now implies being dominated by countless hoops through which it is almost impossible to jump.

There is, let me be clear, no need to protect the oil and gas industry—that is, to artificially assure its longevity. As new sources of energy and new technologies emerge, if they are affordable and reliable there will be ample incentives for them to flourish.

This is to our shame and to our detriment as Canadians. It is especially disheartening that the majority of the country is woefully indifferent to the stupidity of the insurmountable regulations that have become merely a masquerade behind which every anti-development “activist” hides.

Former minister of finance and natural resources Joe Oliver is trying to give Canadians a wake-up call and shake us out of our complacency.

“Canadian indifference, largely outside Alberta and Saskatchewan, is costing the country dearly,” he said, “because if the public did care, then no government, regardless of its political stripe, would dare thwart the determined will of the people.”

He wondered: “Is anyone home, or is everyone posing for a selfie?”

Calgary writer Amanda Achtman holds an MA in philosophy and a BA in political science. She has participated in seminars on economics and the free society hosted by numerous institutes, including: the Acton Institute, Mises Institute, and the Foundation for Economic Education. 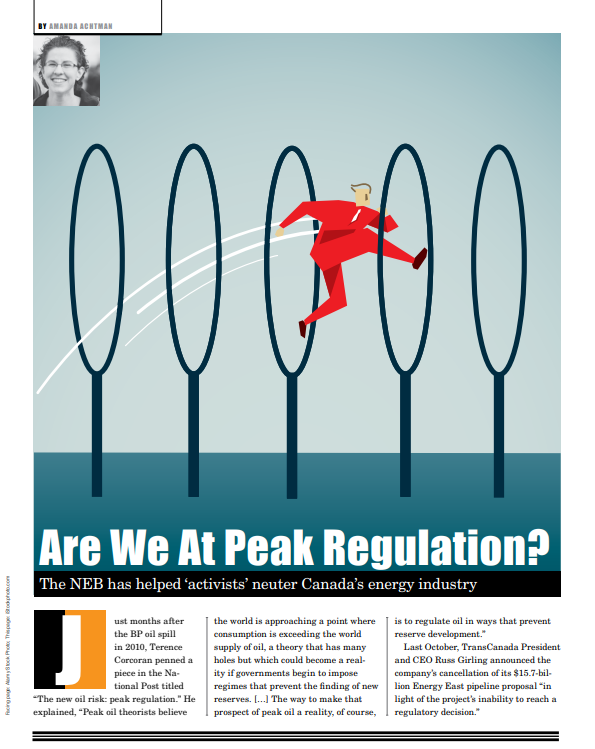 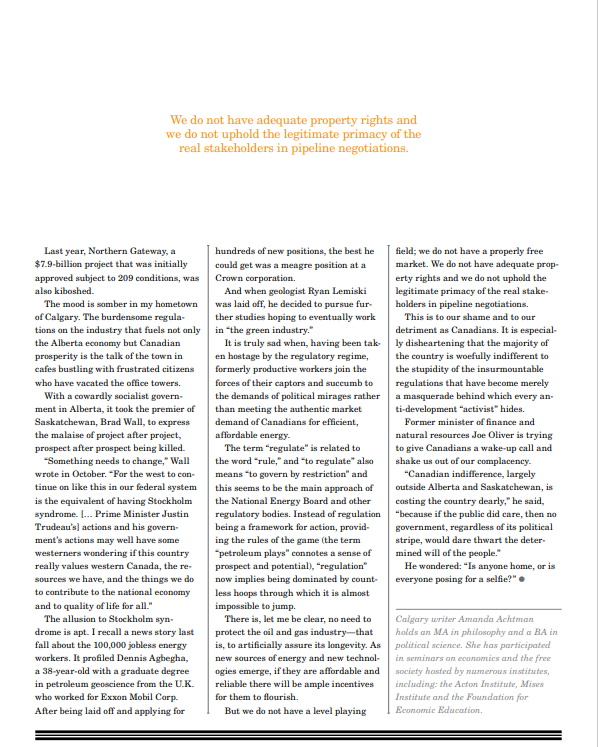