“Falling on the wrong side of the eco and equitable camps these days means keeping your thoughts to yourself unless you want to be hassled, protested or worse.”

Perhaps it’s another case of history repeating itself.

Gas prices are a hot topic among B.C. voters these days. And most of the blame is falling on a party I would never have guessed.

It reminds me of an old history lesson about the Soviets: Out of the peasant class there came some relatively affluent farmers (the kulaks).

Obviously their success meant they did something bad. So they were scapegoated as class enemies of the poorer peasants. Their property was taken away, and many were killed.

Their farms were turned into communal areas and given over to less prosperous peasants, who—surprise—were not as good at farming as the kulaks.

After that came mass starvation.

Anyway, what does this have to do with B.C. and the cost of gas? Let’s lay out some background.

Start with a spring refinery shutdown season that then leads into the ultra-high-demand summer holiday driving season. Tack on a complete unwillingness to build new refineries. Fortify with zero tolerance for increased tankers in coastal waters.

Obviously it goes without saying that when pipeline projects like Trans Mountain are resisted (or in the case of the Northern Gateway project, killed off altogether), that threatens to pump up fuel prices via supply restrictions.

Then come these pesky high prices for gasoline.

If X doesn’t get the result you want, the answer is obviously more X

I’ll give you a rough cross-section of the personalities I hear in conversation as I travel around B.C.’s Okanagan region:

Vaguely pro-environment, vaguely anti-profit (except when she’s profiting), thinks any cost increase at the pump should be met with stricter regulationss and perhaps even a boycott of certain service stations.

Wonders why fuel and insurance and food are all going up in price, friend told him it was because capitalism was evil, sounds plausible … hey, did you see the latest on Instagram?

Won’t be happy until gas is unaffordable for everyone except celebrities and dignitaries who jet around the world lecturing the rest of us on population control. Even though the above two types are his natural allies, he hates them because they insist on driving cars.

The connecting factor of all three is their public and vocal condemnation of gas-station owners.

You may say, “Well, we have bigger issues to defend than the honour of the gas-bar owner.”

Isn’t it interesting, though, and more than a little terrifying, that the general citizen is so quickly willing to scapegoat a middleman further on down the line?

The gas-station owner is, after all, their neighbour. And not in the sense of a general appeal to King and Country, but a person who physically lives down the block.

And that turns out to be the owner’s biggest weakness—he or she is right there in front of them and is not only in business, but the oil business. The family-owned gas bar and convenience store is, after all, the terminus of every pipeline any of those profiled above ever hated.

I’m not saying the gas station owner is some sort of misunderstood hero. But that is about the last place I’d look if I were bitter about pump prices.

We might start, instead, by looking in the mirror.

How long to stay in the political closet?

Falling on the wrong side of the eco and equitable camps these days means keeping your thoughts to yourself unless you want to be hassled, protested or worse.

You also don’t want life to become constant and petty squabbling with every other member of your community, nor does it seem healthy or effective to forever fret about things over which you have very little control.

And yet, it’s a well-worn political cliché to talk about “divisiveness.” But I’m not sure that divisiveness is such a bad thing (the alternative being mindless lock-step, perhaps off a cliff). It’s closer to an ultimate truth about the human condition. A necessity, even.

So forget all that hooey about convincing others. Maybe the best you can hope for is to make enough money that you don’t have time to care about gas prices because you’re too busy getting your accountant and lawyer to stash your cash somewhere safe.

And while you’re at it, propose to some of your golf buddies that you all go in together, not on an apartment complex in Florida but on a politician who might have your back once in a while.

Until you’re at that point, it feels like the greedy gas-station monster caricature is a nice barometer to check. Like people railing against the greedy factory owner or greedy farmer of the past, it’s like a pop song that gets recycled every other decade or so. 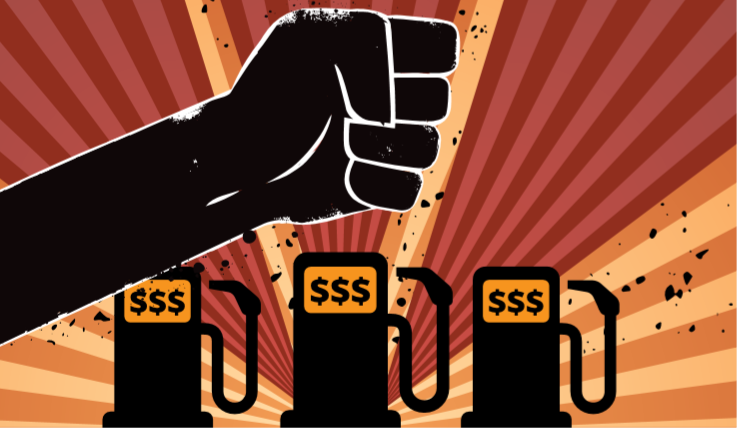