Are Agricultural Land and Commodity Prices About to Soar?

It looks like it.  But inflation can be confusing — and dangerous…

“Other winners include owners of land and other physical assets that retain their value.”

I was asked recently about the direction of farmland and commodity prices as we enter what appears to be a major inflationary period. Paraphrasing Yogi Berra, it is difficult to make predictions, especially about the future.

What is known is that 2021 began with prices for agricultural crops approaching and hitting five-year highs across the board: wheat, oats, corn, flax, peas, lentils, canola, soybeans, soybean oil and soybean meal. There was no new information about supply and demand conditions of any crop in any region to justify the recent run up of prices. And it's not just crop prices that are rising and reaching multi-year highs. Look at the prices for crude oil and industrial metals like copper, stock market indices and of course, land prices.

Prices rising in concert like this is very unusual. It is especially peculiar in an environment where business activity and consumer purchasing patterns have been stifled by the policy responses to COVID. Some have suggested the surge in futures prices may be the outworking of extraordinary interest among speculators. With record low interest rates there are fewer financial alternatives offering the potential for high yields.

A more compelling explanation is the record growth in the money supply. The Bank of Canada, the Federal Reserve Bank in the United States and central banks elsewhere are printing money like it's going out of style. Central banks are doing this to partially monetize record government budget deficits and to prevent interest rates from rising.

From April through December 2020, the Bank of Canada bought Government of Canada bonds at the rate of $25.5 billion per month. This is the fastest pace of producing Canadian dollars in 30 years. In the United States over the same nine months, the supply of U.S. dollars increased at a rate of US$348 billion per month. With each passing day, the number of Canadian and U.S. dollars in the world is much less scarce.

With an increase in the supply of money, some of the purchasing power of the previous stock of money is conferred to the owners of the newly created money. The result is that the purchasing power of each monetary unit is reduced. The consequences are profoundly distorting, which makes individual decision-making even more challenging.

The commodity price boom and stock market highs are evidence of a decreasing purchasing power of money brought about by inflation. At this time, commodity prices are not rising because of changes in the demand and supply for them. Stock prices are not rising because of record corporate earnings. Rather, we are witnessing a fall in the purchasing power of our money. With inflation, people need more money to buy the things they want. Having all prices going up is a reflection of the value of paper money going down.

Effects of inflation can’t be avoided…

This trend may continue for two reasons. With government spending outpacing revenue collection in Canada and elsewhere, borrowing has reached unprecedented levels. To fill the expanding shortfall, central banks will buy more government bonds. In exchange, central banks will supply more currency to the Treasury. And to keep interest rates low as the demand for debt grows, central banks will purchase more financial assets, including government debt. This will further fuel new money creation and lead to further debasement of our money. Until the borrowing stops, the interest rate rises, or both, the process will repeat with ever greater intensity.

The effects of inflation create easily identifiable winners and losers.  Inflation benefits large borrowers who, with rising prices, find it easier to pay back their debts with devalued money. Other winners include owners of land and other physical assets that retain their value. In contrast, inflation is detrimental for those who keep cash savings, those on fixed incomes and for workers with fixed wages.

The irrefutable effects of inflation cannot be avoided. They don’t appear right away, as it takes time for the effects to manifest, but appear they will.

Inflation depreciates the value of our money. It raises our cost of living. It wipes out the value of our cash savings. It motivates us to spend now while discouraging us from saving for the future. It complicates business planning, especially production activities requiring long periods of time.  And it results in a diversion of wealth from wealth generators toward the holders of newly created money. While owning physical assets is a means of hedging against the effects of inflation, inflation is bad news for the creation of wealth.

Danny Le Roy, PhD., is an economics professor at the University of Lethbridge where he is also coordinator of the Agricultural Studies program. Areas of research include commodity production, marketing and trade, government interventionism and Austrian Economics. He blogs occasionally at mises.ca. 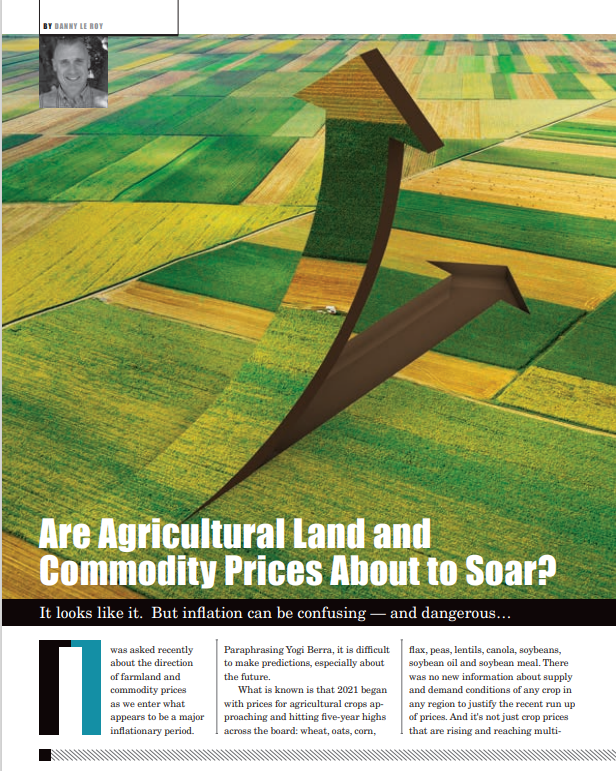 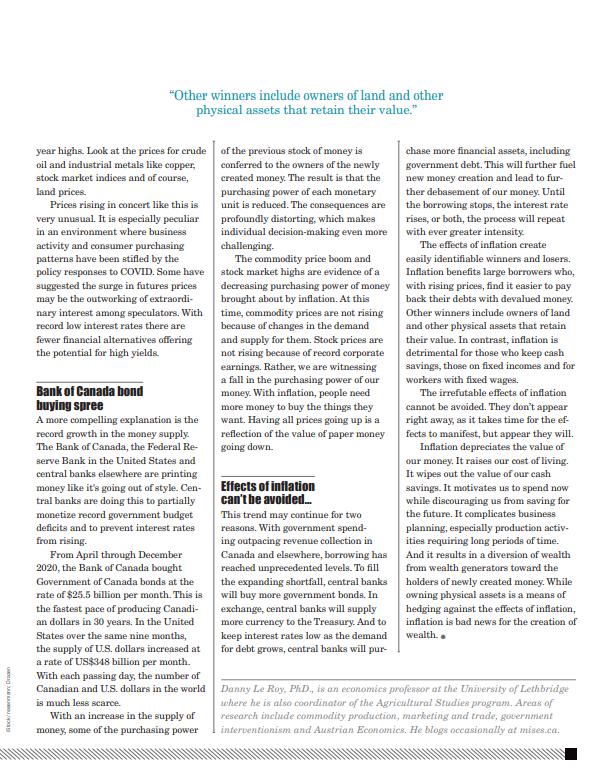