An Energy Super-Power in Waiting

"The best approach for the energy industry, including energy transport, would be to respect landowners as if property rights were legally protected."

Quebec is sometimes a very difficult place to understand, even for residents of La Belle Province themselves.

And when it comes to the energy sector in this province, it becomes more difficult still.

Many reasonably think that people in Quebec are anti-development and anti-energy — given the exaggerated media coverage of anti-pipeline activists opposing TransCanada’s Energy East, among other projects.

In fact, it’s the opposite. Especially when pitched the right way, people in Quebec are very receptive to energy projects. Even politically, after some policy mishaps in the last few years, the leadership of all three major parties in the Quebec National Assembly are realistically keen on more energy development, as seen with the oil projects at Anticosti Island.

Energy and natural resources development is not something foreign to Quebec. Quite the contrary. Hydro-Québec is one of the world biggest hydroelectricity producers, and mining and forestry are the lifeline of entire regions.

Yet it’s nonetheless true that pipelines and energy development are still very hot “wedge” issues these days — a political minefield where the search for support is more important than any other consideration in a rational clear-eyed debate.

What explains the failure of many projects (such as the shale gas experiment) in Quebec is a mixture of bad communication combined with bad policy, despite the fact most of the public are very pragmatic and no-nonsense when it comes to energy.

The notion of a “silent majority” in Quebec is very much a reality. The tragic events at Lac-Mégantic are a good example of this mindset — people are justifiably angry at the deaths resulting from bad management by the oil-by-rail company, but on the other hand have not lost sight of the fact that the energy sector is something that brings jobs and more prosperity to them and their neighbours.

But winning the public-opinion war remains important in Quebec, and there is no doubt that anti-energy fear-mongers are eager to push their agenda. Which means that in order for a company like TransCanada to succeed with its Energy East pipeline project in Quebec, the industry will have to up its PR game considerably.

One approach would be to ally with small and medium-sized businesses to remind the public how essential energy is to local economic prosperity and quality of life.

Another long-lasting fear in the Québécois psyche is that “strangers” are coming to grab “our” natural resources for “cheap.” Anyone who wants to invest in the energy sector in Quebec must find ways to counter these arguments. It’s easier said than done, but there are ways to approach the discussion, such as emphasizing the benefits to the local workforce that ultimately profits from investments in energy development and transport.

The shale gas fiasco in Quebec has exposed another long-lasting problem in the province — the lack of property rights, especially with the Crown “owning” what's underneath the land of farmers and ranchers in Quebec (as is the case in most of the rest of Canada.)

These archaic laws are probably one of the best arguments against shale gas development in Quebec. They encourage a “tragedy of the commons” fear among landowners that oil companies are getting a free pass courtesy of cronyism in their government. The same goes for the looming threat that the National Energy Board could expropriate land needed by pipelines instead of respecting property rights.

Indeed, it’s not surprising that people worry about the impact of pipelines or energy extraction on water or soil when government policy effectively encourages reckless use of expropriated land.  Working directly with landowners with an emphasis on good communication is key to winning locals and the general public over to these important developments.

If the subsurface were owned by local or other investors instead of by the Crown, and if landowners had property rights protecting them from expropriation by government, the benefits of these developments would be seen as flowing from the bottom up.

The opportunity for local private landowners and investors to be seen as partners in high-profile energy projects like Energy East would go a long way to creating buy-in from the Quebec public.

Until property rights are strengthened in Canada, it will be difficult for Quebec to aspire to become an energy superpower like a Pennsylvania or North Dakota.

Until then, the best approach for the energy industry, including energy transport, would be to respect landowners as if property rights were legally protected. This would build local support, which would reassure the people of Quebec that “outsiders” are not exploiting them and that the environment is being looked after.

Quebec does not need to be a lost cause for energy and pipelines. Building public confidence will make it easier to attract investment and get political approval for the projects necessary to help turn Quebec into a superpower in energy, just as it is already in hydroelectricity, forestry and mining. 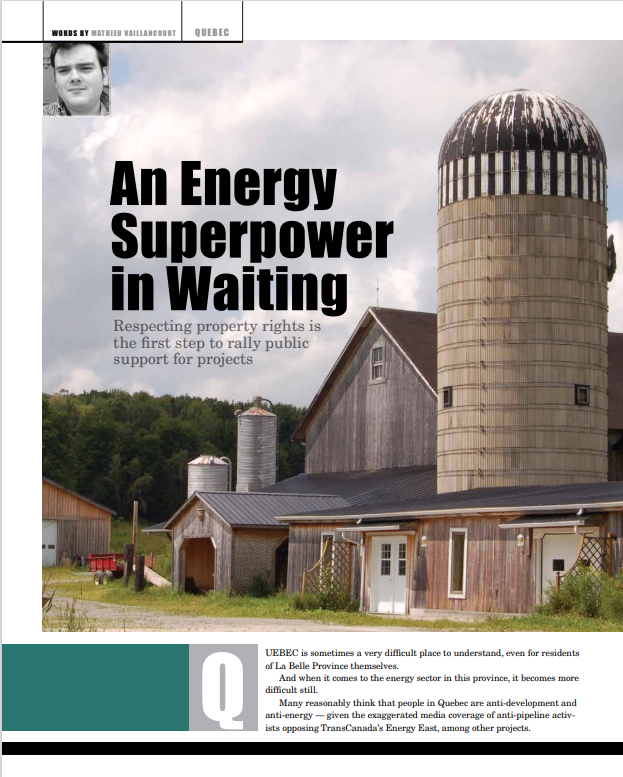 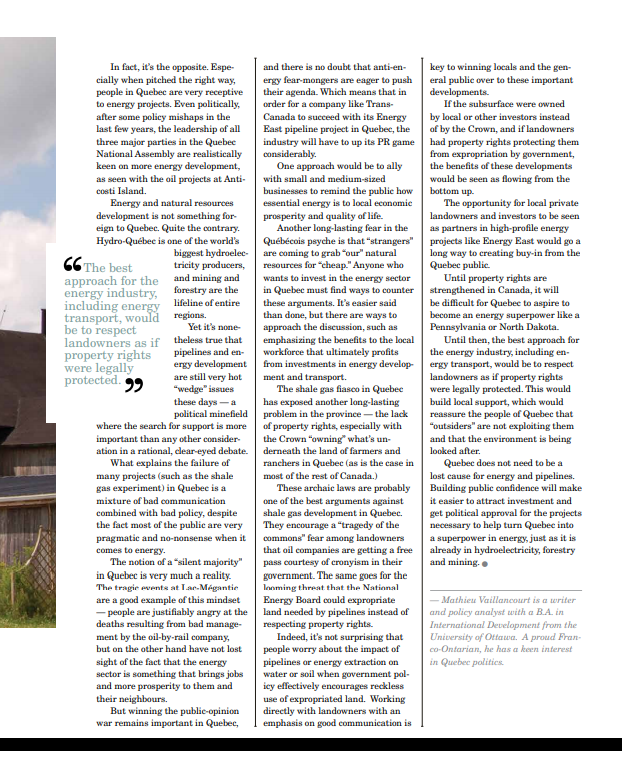 Mathieu Vaillancourt is a writer and policy analyst with a BA in International Development from the University of Ottawa.  A proud Franco-Ontarian, he has a keen interest in Quebec politics.