All Canadians Are Pipeline Landowners

Our world-beating energy transport sector is built on safety

There is a lot of anxiety in Canada today on the subject of pipelines and the safe transportation of the products they deliver. Despite that, I'm going to make a very bold statement.

There isn't a person alive in Canada today who doesn't benefit from the products transported through pipelines. And, as Canadians, we are fortunate. Not only does Canada have a tremendous quantity of natural resources enabling our country to thrive, we also live in a society that values freedom, democracy, diversity, environmental responsibility and respect. It is because of these values that we place such a high importance on safety.

Even with these values, responsible development of our natural resources and pipelines face persistent questions: Are pipelines safe? Are we doing enough?

The reality is that pipelines have never been safer—and Canada is recognized as a leader in pipeline safety. Delegations from around the world come to Canada to learn how we build, operate, maintain and govern Canada's transmission pipeline network. It's an earned privilege the industry humbly acknowledges.

In addition to being a world leader in the responsible extraction, refining, transport and use of fossil fuels, Canada is committing to do more, to reach higher and to be an example for other countries to follow. Our country recognizes that the economic sustainability of the nation is dependent on these goals. So while we may wean our dependence on hydrocarbons, we must also simultaneously, and responsibly, exploit them.

"Delegations from around the world come to Canada to learn how we build, operate, maintain and govern Canada’s transmission pipeline network. It’s an earned privilege the industry humbly acknowledges."

In this sense, we are all pipeline landowners. Each and every one of us holds the responsibility and has the capacity to enhance the safety of our fellow Canadians. It begins with everyone committing to doing something so that collectively, we reach our stretch goals.

The Canadian Common Ground Alliance (CCGA) isn't going to bring about an about-face on public perception, and it certainly won't achieve “social license” to build pipelines all on its own.  But we can do our part to promote and support the solid framework that ultimately achieves the safety goals we’ve set. We know what we're good at and we know what we can achieve—and we're doing it right now.

Meanwhile, the National Energy Board (NEB) Damage Prevention Regulations (DPRs) will replace the Pipeline Crossing Regulations, Part I and Part II. These regulations will, among other things, require federally regulated pipeline companies to register the location of underground infrastructure with a notification (One Call) centre.

This might not sound like a big deal, but it is. One Call centres have existed in Canada for more than 30 years, yet only three jurisdictions, British Columbia, Alberta and Ontario, have imposed damage prevention legislation. Provincial regulations in British Columbia and Alberta require provincially regulated pipeline operators to register the location of their underground infrastructure with the notification centre of their province, while in Ontario, all underground infrastructure within a public right-of-way must be registered with Ontario One Call.

The proposed legislation begins to level the damage-prevention playing field and brings us closer to securing the integrity of Canada’s critical underground infrastructure.

It’s not just about pipelines. It’s about fibre optics, telecommunications, electricity, and protecting our businesses, our hospitals, our financial institutions and our safety services against unnecessary disruptions caused by uncontrolled excavations. While injuries and fatalities can occur, such incidents are rare. With every incident, however, there is a cost of repair, and there are societal costs such as the deployment of emergency services, evacuations, loss of business, interruptions to financial transactions and 911 services. The cost of these losses is enormous.

Last year, the CCGA secured a contract with CIRANO, a centre for inter-university research and analysis, to develop a formula that could be applied to the number of damages to determine the societal costs borne by Canadians. The results are staggering.

In Alberta alone, there were 2,650 damages reported into the Damage Information Reporting Tool with an estimated societal cost of over $300 million. When applied to the known number of damages that occurred across Canada, the societal cost of damages rises to $1 billion. The vast majority of these incidents were 100 per cent preventable.

There isn't a Canadian among us who hasn't been fed a warm meal, hasn't walked out of the cold into a warm house, or hasn't traveled across their town, city, or country. We take our freedom, and the energy that enables it, for granted—and we simply can’t do that any longer.

Mike Sullivan is the president of Alberta One-Call Corp. and executive director of the Canadian Common Ground Alliance. 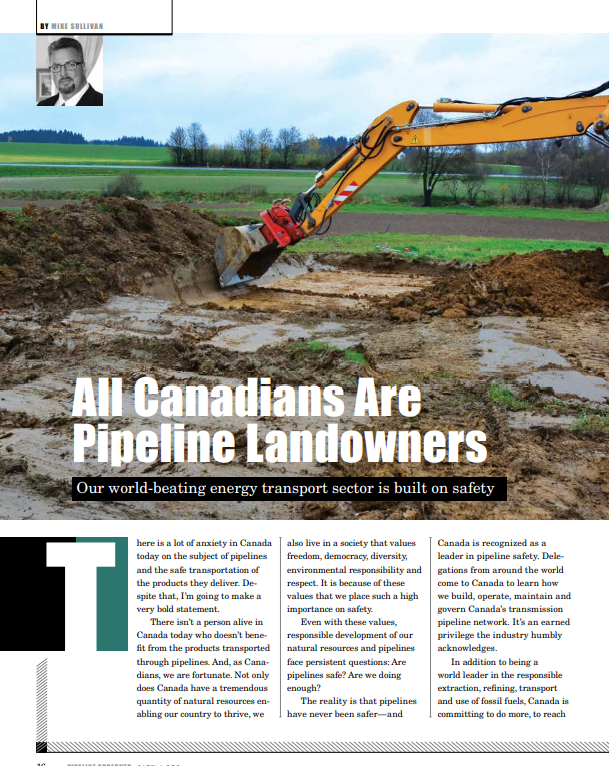 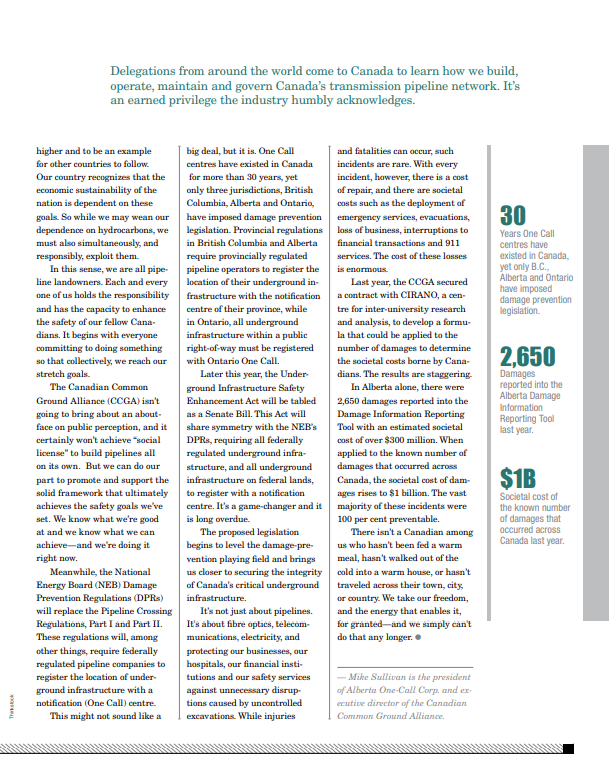