Kenney government takes a page from Trudeau’s playbook and bails out another project.

“We need major reform in this country so that these projects can be built without nationalization while respecting the rights of property owners.”

It was bad enough when Ottawa bought the Trans Mountain pipeline from Kinder Morgan. Now the Alberta government has jumped into the pipeline business.

The Alberta government is making a huge investment in the Keystone XL project: $1.5 billion for an equity stake and a $6 billion loan guarantee for TC Energy (formerly known as TransCanada — back when “Canada” wasn’t a dirty word for investors).

Given the political turmoil surrounding pipeline issues in North America, it’s hardly even surprising that Alberta premier Jason Kenney felt compelled to partially nationalize the project. No one cares about “social license” anymore.

But understanding the motive is different than endorsing it. Despite the importance of Keystone XL to Alberta’s economy, the Alberta government’s ‘investment’ is a mistake.

Political risk aside, the actual business case for the Keystone XL pipeline remains mostly unassailable. It is a massive project that will culminate with a 2,000-kilometre pipeline carrying more than 800,000 barrels of oil per day from Alberta to the Texas Gulf.

It’s obvious why Alberta would want such a project. Alberta is the only major oil-producing jurisdiction in the world that completely lacks direct access to the ocean.

That’s an easy argument to make. But many people wonder why the US, a country many analysts expect to soon reach oil self-sufficiency, would want such a project. It turns out our American friends have a very compelling need for it as well.

The key is oil chemistry. A given oil refinery cannot take every different kind of crude oil product to process. These complex facilities are configured for specific kinds of crude.

The Texas Gulf Coast refineries are optimized for heavy crude that is not readily available. For these refineries to make money with current capital investments, they require a supply of heavy crude. A great deal of this heavy crude has traditionally come from Venezuela, a country that has been able to charge higher prices because of insufficient competition.

Keystone XL provides the means for American refiners to get the right product for a lower price while increasing the price Alberta producers can get. Win-win.

And because a lot of American oil production is essentially uneconomical  at the inflation-adjusted average price of the last 150 years, there is even a strong chance the US will need more western Canadian oil in coming years as its own marginal producers go out of business.

So what’s wrong with the Alberta government investing in the project? Isn’t it possible that they will make money on the deal? Yes, that is possible. However that doesn’t mean it’s a good investment, because the return must be commensurate with the level of risk.

Unfortunately, the Alberta government ‘investment’ may have increased the likelihood that the project will eventually fail.

“Oil is a wonderful gift of nature — it is organic and biodegradable and using it to produce energy has made the planet cleaner and wealthier.”

Alberta taxpayer dollars don’t eliminate political or any other risk

Moral hazard describes when someone participates in risky activity knowing they are partly or wholly insulated from the risk and that costs can be shifted to other parties. Their incentives are therefore different from what they would otherwise be if they assumed all the risk themselves.

Alberta’s investment increases the moral hazard for an already contentious project. That’s because by guaranteeing billions in project loans, they’ve reduced the pain TC Energy would otherwise suffer if they defaulted on their project loan themselves. TC is essentially on the hook for only one-third of the total cost.

Alberta’s investment doesn’t make the political risk go away, and that risk is tremendous. Shortly after the Alberta government made its announcement, the all-but-guaranteed Democratic presidential nominee, Joe Biden, declared that he will revoke TC Energy’s permit granted by President Trump. In any case, the project is constantly fighting against politicians, environmentalists and property owners along the route. And in fact late in May a US appeals court effectively stripped the company of an environmental permit over concerns about water safety.

It is easy to understand why some people believe this kind of government intervention is necessary. But we don’t want to live in this world we’ve created for ourselves. There shouldn’t be so much riding on Keystone XL in the first place. But here we are, because we’ve handicapped our own pipeline industry.

This is supposed to be a country that is fair and friendly to private enterprise, with systems and institutions rooted in the rule of law. We need to take a step back and evaluate why these projects are such a mess. We need major reform in this country so that these projects can be built without nationalization while respecting the rights of property owners.

Contrary to the claims of radical environmentalists, oil is the lifeblood of the industrial civilization that makes our lives tolerable. This will be true for many decades to come. Oil is a wonderful gift of nature — it is organic and biodegradable and using it to produce energy has made the planet cleaner and wealthier. For the sake of increasing prosperity, helping the environment, reducing global conflict over resources, exporting cheap oil from Canada through Texas is a wonderful thing.

But in the face of political interference, regulatory chaos and all-around mismanagement, these projects can’t be completed purely on their business fundamentals. Canada needs to fix the mess it’s created so we never have to nationalize another big energy project. 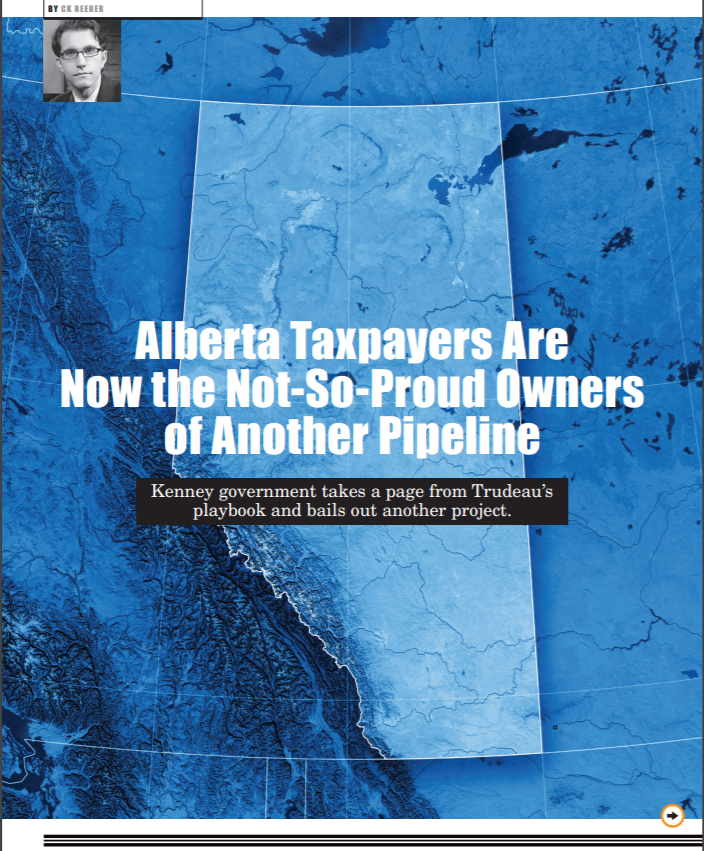