An Alberta court ruling means it will be more difficult for Ottawa to obstruct energy infrastructure — at least for the time being...

A four-judge majority of the Alberta Court of Appeal declared the federal government’s environmental impact law is unconstitutional — a decision Ottawa promptly vowed to appeal.

The ruling was cheerfully received by Alberta’s United Conservative government, which had challenged the Impact Assessment Act (IAA), previously known as Bill C-69, arguing the law was an overreach into areas of provincial jurisdiction.

The court’s non-binding ruling on May 10 called the IAA a “classic example of legislative creep,” and an “existential threat” to the division of powers guaranteed by the Constitution.

However, the decision does not mean the law has been struck down and major projects will continue to be assessed under the federal legislation. Legal experts said they expected the matter will make its way to the Supreme Court of Canada.

The IAA received Royal Assent in 2019. The act established an Impact Assessment Agency and allowed Ottawa to evaluate major projects based on a broad range of environmental and social issues, including climate change.

Alberta’s government had referred to the legislation as a “Trojan Horse” that Ottawa could use to justify interference in areas of provincial jurisdiction. Ontario and Saskatchewan backed Alberta in challenging the act, which applies to projects such as pipelines, hydroelectric and nuclear facilities, and oil and gas extraction.

Prime Minister Justin Trudeau said in the House of Commons that his government will appeal the Alberta court’s ruling in the reference case.

Alberta Premier Jason Kenney hailed the court’s decision on social media. “An historic victory, and central part of our strategy to fight for a fair deal!” the premier said on Twitter.

Legal scholars say there are clear parallels between the reference case against Bill C-69 and Alberta’s previous case against the federal carbon tax, in which the Supreme Court eventually ruled that the federal price on carbon did not violate the rights of provinces.

In this instance, the Alberta Court of Appeal appears to have relied on a narrow view of federal jurisdiction and an expansive view of provincial jurisdiction, said David Wright, an assistant law professor at the University of Calgary.

“The majority has exposed itself to correction, if not rebuke by the Supreme Court of Canada, because of how much emphasis they placed on the notion of exclusive provincial jurisdiction,” said Wright, adding that the majority also used remarkably provocative and colourful language in its decision.

The majority, in giving its legal opinion, wrote: “If upheld, the IAA would permanently alter the division of powers and forever place provincial governments in an economic chokehold controlled by the federal government.”

Environmental groups said they were disappointed with the court’s determination, arguing the legislation provides necessary safeguards on major projects for the protection of communities and the environment.

The IAA, sometimes called the “No More Pipelines Act” by its critics, is disliked in Canada’s oilpatch, where concerns persist that the rules threaten the certainty required for investors to move major projects forward.

Canada’s largest oil and gas lobby said it agreed with the Alberta Court of Appeal’s decision.

“(The Canadian Association of Petroleum Producers) agrees with the majority of the Alberta Court of Appeal that the provinces are best positioned to review and regulate resource development projects within their own borders and guard against regulatory uncertainty and maintain competitiveness,” Lisa Baiton, CAPP’s new CEO, said in a statement.

“The decision maintains the necessary constitutional balance between provincial and federal governments in making decisions regarding projects that will advance Canada’s prosperity while protecting our environment.”

With additional reporting from the Canadian Press. 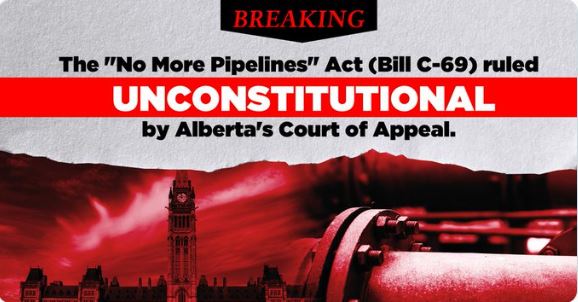