In August, a boring press release floated through the news stream and no one seemed to notice, but it should disturb anyone who supports Canada’s energy industry.

The release was an announcement from Alberta Investment Management Corporation (AIMCo), proudly declaring that it was making a $500 million investment in a U.S. company called Howard Energy Partners.

OK, so what? Well, let’s look at this with some broader context.

AIMCo is a Crown corporation that invests money for Alberta government pensions and endowments, as well as the Heritage Fund. This is a major investor with $90 billion in assets under management.

Essentially, all the money AIMCo invests is directly or indirectly taxpayer money. It’s either Heritage Fund money (which is about $18 billion in assets), or it comes from money paid to public institutions or as compensation to government employees like nurses and teachers.

“AIMCo is investing hundreds of millions of Alberta taxpayer money into US pipeline companies while Canada’s pipeline sector is essentially paralyzed.”

Now what exactly is Howard Energy Partners? It is an American midstream energy company—in other words, they provide energy infrastructure. Things like processing plants, liquid storage terminals and pipelines.

Which means AIMCo is investing hundreds of millions of Alberta taxpayer dollars into U.S. pipeline companies while Canada’s pipeline sector is essentially paralyzed.

Think about this for a minute: While Canada’s pipeline industry is caught in the web of endless hearings and reviews and suffocating regulations, the U.S. has built the equivalent of 10 Keystone XL pipelines since 2010.

Meanwhile, as reported by folks like Vivian Krause, the anti-pipeline movement in Canada is largely funded by U.S. interests as a protectionist strategy that reduces America’s competition.

But on top of that, as per this new AIMCo investment, the U.S. even has the pleasure of having Canadian capital invested in its own pipeline companies.

That isn’t really the point. Instead, this situation highlights the bafflingly frustrating situation in Canada’s pipeline sector.

Does Canada really want to be a country that strangles its own energy industry while its Crown corporations pump huge amounts of tax dollars into foreign pipeline companies?

It’s not just an isolated incident with AIMCo. Earlier this year, OMERS (a massive Ontario pension fund for government employees) made a significant investment in a Spanish pipeline company. This happens time and time again.

How does that make sense to anyone?

Canada’s policy towards energy infrastructure is clearly deranged. AIMCo’s $500-million investment perfectly illustrates why our country’s approach to this issue is incoherent, impoverishing Canadians and enriching other countries and their businesses.

C. Kenneth Reeder is a financial analyst providing mergers and acquisitions advisory services for mid-sized, privately held companies in Western Canada. He works with many clients in the oilfield services sector. He is the editor and publisher of CanadianMarketReview.com and a contributing editor at WesternStandard.ca. He lives in Calgary. 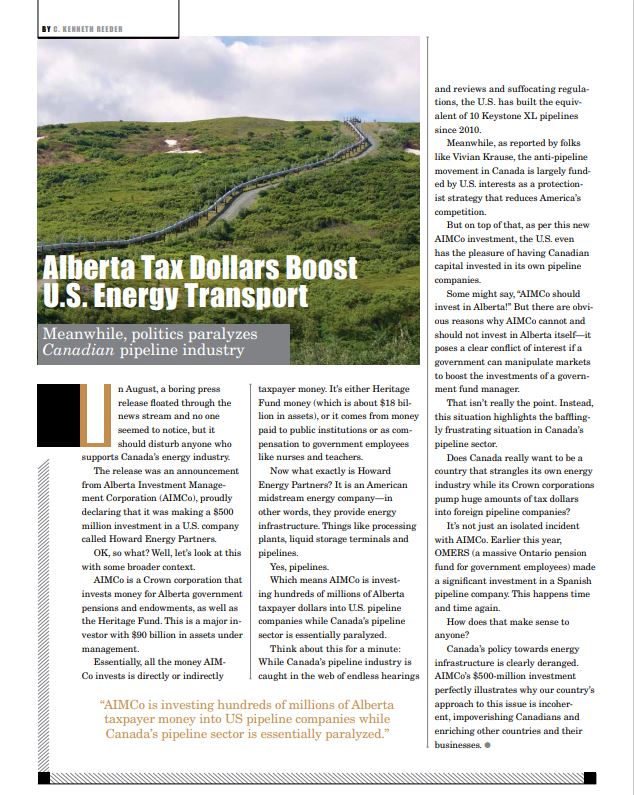