CALGARY — Two Alberta landowners have filed what a lawyer says could be the first class-action lawsuit against an energy company for not making its lease payments.

"It's a pretty clear contract," said lawyer Matthew Farrell, who is representing Reinhold and Thyra Kautz of Strathmore, Alta., in their proposed class action against AlphaBow Energy Ltd. of Calgary.

"They're supposed to pay every year and now (they're) not. You can't do that."

In a statement of claim filed in Calgary on Nov. 4, the Kautzes allege AlphaBow has reneged on a lease agreement that compensates them for the oil and gas company's access to and use of two parcels of land.

The document quotes a letter in May from AlphaBow, which says: "Due to the severe impact of the COVID crisis that the oil & gas industry is currently facing, AlphaBow Energy Ltd. is hereby advising that AlphaBow is deferring any and all surface rental payments for the time being.

A deal's a deal, said Farrell.

The lawsuit's claims haven't been tested in court. No statement of defence has been filed and an AlphaBow spokesperson didn't respond to a request for comment.

The Kautzes are the only plaintiffs at this point and aren't owed a large amount of money, Farell said. But he noted that AlphaBow has dealt with hundreds of landowners and he expects damages to add up as others join the class action, which has not been certified by the courts.

"It's the kind of injustice class actions are designed to remedy."

It's the latest flashpoint for an industry struggling with low oil prices.

Earlier this year, many rural municipalities in the province learned that energy companies wouldn't be paying a total of $173 million in municipal taxes. Alberta's United Conservative government has since given industry a three-year exemption from property taxes on new wells or pipelines and has lowered taxes on older wells.

Lawyer Keith Wilson, who has worked on similar disputes between industry and landowners, said the lawsuit is groundbreaking.

"It's the first time there has been any form of class action against oil companies. It's a real sign of the extent to which the relationship and the normal institutions that have been in place to keep peace between two critical industries are faltering."

Alberta's Surface Rights Board does step in to adjudicate disputes and the provincial government has a mechanism for covering unpaid leases. Freedom-of-information documents obtained by The Narwhal magazine show Alberta paid $8 million in such claims last year.

"It's not right and it's not fair," Wilson said. "We've created a political culture in our province where no politician is prepared to deliver any bad news to an oil company or remind them of their obligations."

This report by The Canadian Press was first published Nov. 10, 2020. 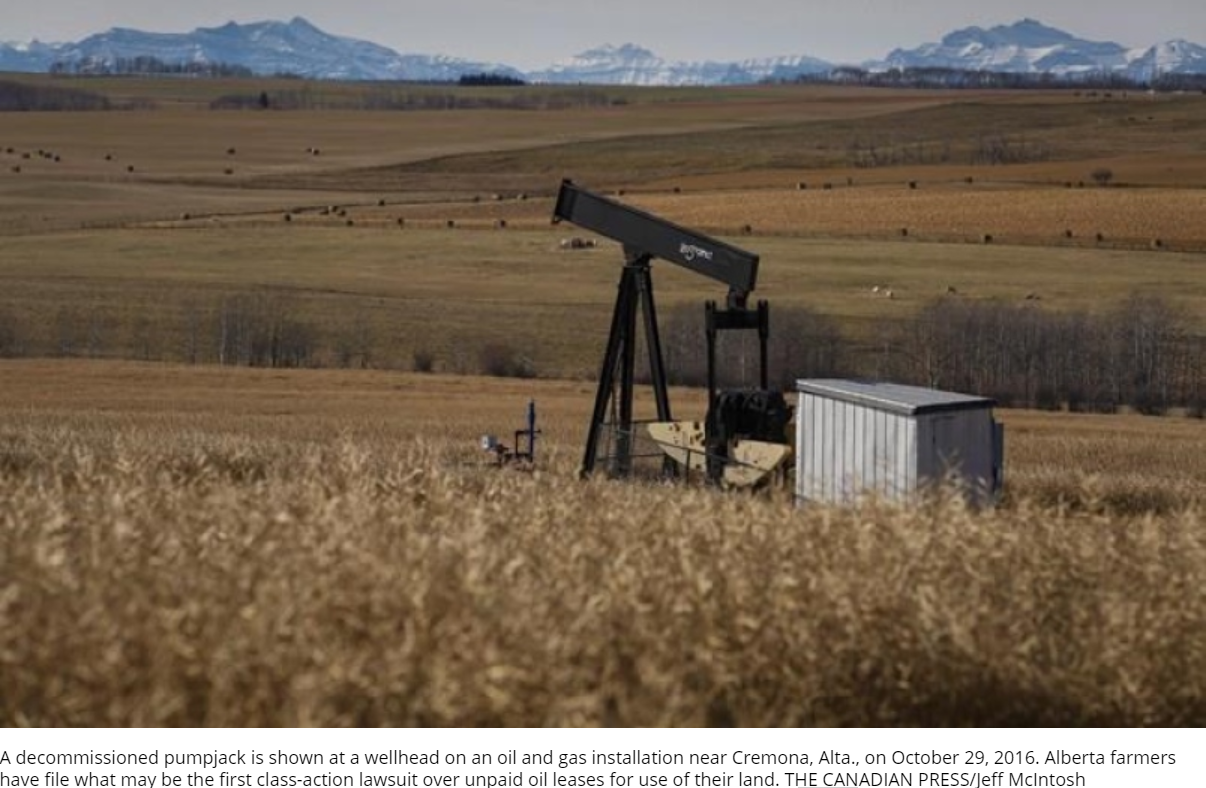