Aiming for a Win-Win

Pipelines are no longer “out of sight, out of mind.” That is evident from the stories we see on TV news, in the papers and all over social media.

With their seemingly never-ending protests and applications to intervene at National Energy Board hearings, the anti-pipeline movement has succeeded in whipping up the public like never before. It has also managed to create a lot of anxiety among landowners, judging by the increasing number of calls CAEPLA is getting these days from farmers and ranchers.

The vast majority of calls we get at CAEPLA are not against pipeline projects per se. They are from landowners who have heard that they might be getting new pipe across their land, or that old pipe on their property is going to be abandoned or replaced.

In most cases, they are not worried about the project itself so much, but are more concerned about ensuring the pipe they do get is safe and won’t disrupt their farming operations or disturb their soil. They wonder what they can do to get a contract that will protect their property, and get a good deal from the pipeline company.

As you can imagine, all of the anti-pipeline hype we are bombarded with generates a lot of extra anxiety among even the most conservative landowners.

Along with being put in place as new routes to transport Canada’s energy, new pipelines are being built to replace old, aging pipe. We see this as good news — if you are worried about the condition of aging pipelines, many of which are half a century old, you obviously want to see new, state-of-the-art lines replace them.

Meanwhile, landowners are busy doing what they do best — making a living farming, ranching or running wood lots on their land — but are coming to the conclusion they need a professional organization with the expertise to help them negotiate a business contract. This is much the same as when they seek out other professionals like accountants, lawyers, realtors or agrologists to help them with other aspects of their family business.

This is what CAEPLA does well. We realize that a landowner on his or her own is not on a level playing field when dealing with a pipeline or power transmission company. So we encourage landowners to work together as a group with their neighbours and have CAEPLA help negotiate a win-win business agreement — one that works equally well for you and the company -- that will form the basis of a prosperous partnership for decades to come.

Our goal is to help level the playing field when dealing with the energy transport sector — which, when push comes to shove, is all too often backed by government’s willingness to expropriate your land and turn it over to the company if you balk at its offers.

Over the past 25 years, the pipeline landowners movement has negotiated win-win business agreements for thousands of landowners across Canada on both pipeline and power transmission projects.

Many of these deals have been precedent-setting, and have protected landowners, their families and their investments in a variety of ways. They have defined construction practices clearly, and provided construction monitors who work for landowners to ensure projects proceed according to contract terms. They have provided for the formation of joint committees of landowners and company representatives, to which landowners can go for resolution of any problem they may be experiencing, and they’ve included an array of other benefits.

Earlier this year, CAEPLA ratified another precedent-setting contract on the Enbridge Line 3 Replacement Project. This agreement commits Enbridge to a first-in-industry clubroot biosecurity protocol developed by Prairie farmers and CAEPLA members like you. We have also reached agreement on decommissioning that includes independent research to resolve the concerns landowners have about being left with deactivated pipe.

By engaging proactively with companies, through these agreements CAEPLA is working on your behalf to improve landowner-industry relations.

Of the many calls CAEPLA receives, the most gratifying are the ones thanking us for the peace of mind that comes with negotiated settlements, a reassurance that helps them sleep better at night knowing their families and investments are protected. 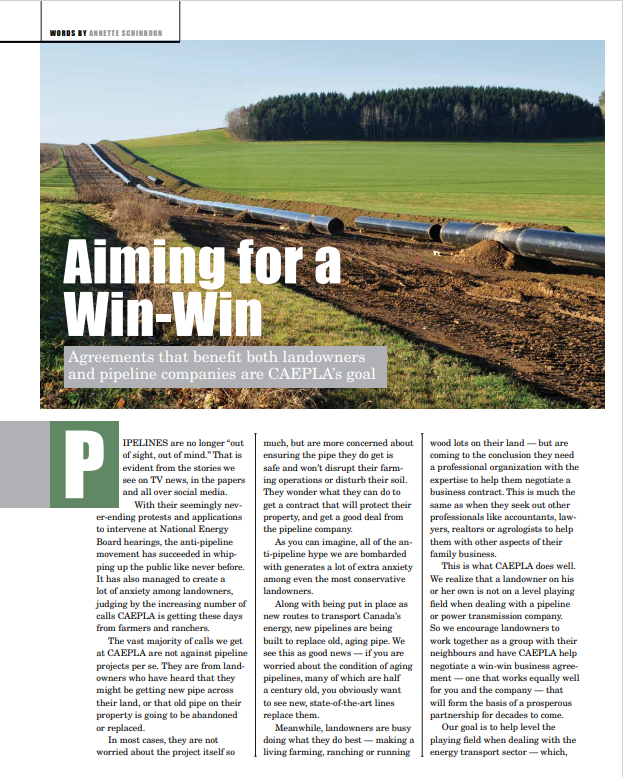 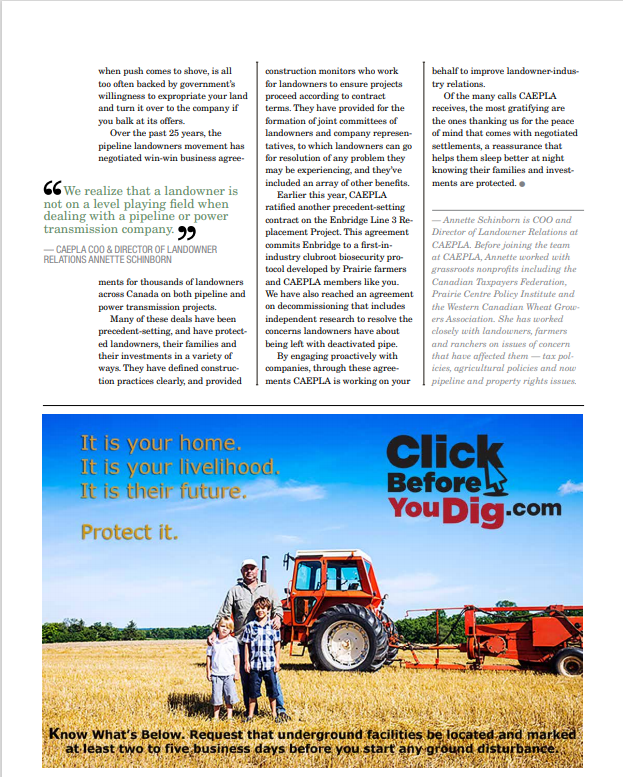 — Annette Schinborn is COO and Director of Landowner Relations at CAEPLA. Prior to joining CAEPLA, Annette worked with several grassroots non-profits including the Canadian Taxpayers Federation, Prairie Centre Policy Institute and the Western Canadian Wheat Growers Association. She has worked closely with landowners, farmers and ranchers on issues of concern that have affected them — tax policies, agricultural policies and now pipeline and property rights issues.