Aging Pipelines - What Are the Risks?

Groundbreaking independent research sponsored by Enbridge and CAEPLA will find out

Canada’s nationally regulated oil and gas pipelines were originally constructed more than 50 or 60 years ago. Many of these pipelines are reaching the end of their useful economic life. The National Energy Board (NEB) has the regulatory authority to authorize pipeline companies to decommission or abandon these pipelines.

While the NEB has implemented a toll surcharge to generate funds for this purpose, the abandonment funding currently being generated will be sufficient only to accomplish removal of approximately 20 per cent of this pipeline infrastructure. Landowners across Canada who may be left with the remaining pipelines buried in their lands are becoming increasingly concerned about resulting interference with their agricultural operations, human and livestock health and safety risks, and potential future costs and liabilities.

In a decision released April 25, 2016, the NEB granted Enbridge Pipelines Inc.’s application for authorization to decommission its aging Line 3 pipeline in Western Canada and to replace it with a new Line 3 pipeline in an adjacent easement.

In responding to Enbridge’s proposal, CAEPLA/MPLA/SAPL raised landowner concerns including definition of appropriate cleaning criteria; development of segmentation methodology to prevent the pipeline becoming a conduit for ground water and contaminants; and hazards for agricultural equipment, people, machinery and livestock that could result from pipe collapse and ground subsidence.

Enbridge has acknowledged that the extensive disbonding of the Line 3 polyethylene tape pipe coating will render cathodic protection ineffective to prevent corrosion, and has estimated time to through-wall penetration at 25 to 50 years. Progressively greater agricultural surface loads increase the potential for pipeline collapse and ground subsidence. In addition to health and safety concerns and related costs and liabilities, topsoil loss upon ground subsidence would result in permanent long-term production losses.

First steps
The CAEPLA – Enbridge jointly commissioned study is now underway at the University of Calgary. It is an important first step to better defining the risks and liabilities of pipelines decommissioned and abandoned in place and to developing acceptable methodologies to reduce risks for landowners.

In the negotiated settlement resolving landowner concerns with respect to the new Line 3 construction in March 2015, CAEPLA/MPLA/SAPL and Enbridge agreed to continue consultation on how to resolve these Line 3 decommissioning issues. CAEPLA/MPLA/SAPL and Enbridge subsequently concluded and filed with the NEB a further Settlement Agreement addressing Line 3 decommissioning.

Under the terms of this agreement, Enbridge acknowledges its liability with respect to decommissioned or abandoned pipelines and agrees to implement measures similar to active pipelines to maintain depth of cover, facilitate crossing with agricultural equipment and address subsidence/drainage issues.

Recognizing the considerable uncertainties related to anticipated Line 3 corrosion rates, pipe collapse potential and resulting implications for landowners, CAEPLA/MPLA/SAPL and Enbridge agreed to jointly commission and direct independent, third-party research at a Canadian university to study the impacts of decommissioning and abandoning pipelines in place, with a view to further defining the associated risks and consideration of alternative decommissioning/abandonment methodologies.

Enbridge is responsible both for the funding of this research project and for the costs of CAEPLA’s participation, including CAEPLA’s own independent consultants. As part of this agreement, Enbridge has also provided to landowners a prepayment to be applied on account of possible future decommissioning or abandonment damages.

In its decision granting Enbridge’s application for Line 3 decommissioning, the Board references the CAEPLA/MPLA/SAPL – Enbridge Settlement Agreement:

“The Board views this Agreement as a positive initiative and found it to be a persuasive factor in favour of the reasonableness of Enbridge’s decommissioning plan… The Board expects Enbridge to continue to consult with affected… landowners during the Decommissioning Activities and the Decommissioning Period and periodically reassess the constraints and hazards that limit pipeline removal to arrive at a solution that is agreeable to all parties, based on site-specific circumstances.”

While authorizing Enbridge’s Line 3 decommissioning, the Board expressly states:

The CAEPLA/MPLA/SAPL – Enbridge jointly commissioned study represents part of Enbridge’s required Line 3 decommissioning continuing landowner consultation. This research is now underway at the University of Calgary. It is an important first step to better defining the risks and liabilities of pipelines decommissioned and abandoned in place, and to developing acceptable methodologies to reduce these risks for landowners.

The final report that results from this research will assist landowners, the industry, and regulators in addressing these issues as Canada’s aging energy pipeline infrastructure is removed from use. It is anticipated that this report will be filed with the NEB prior to Line 3 decommissioning and will then form the basis for regulatory approval for possible required changes to Enbridge’s current Line 3 decommissioning plan.

Paul G. Vogel is a partner in the London, Ont., law firm of Cohen Highley LLP. He practices in the area of commercial litigation and environmental law. 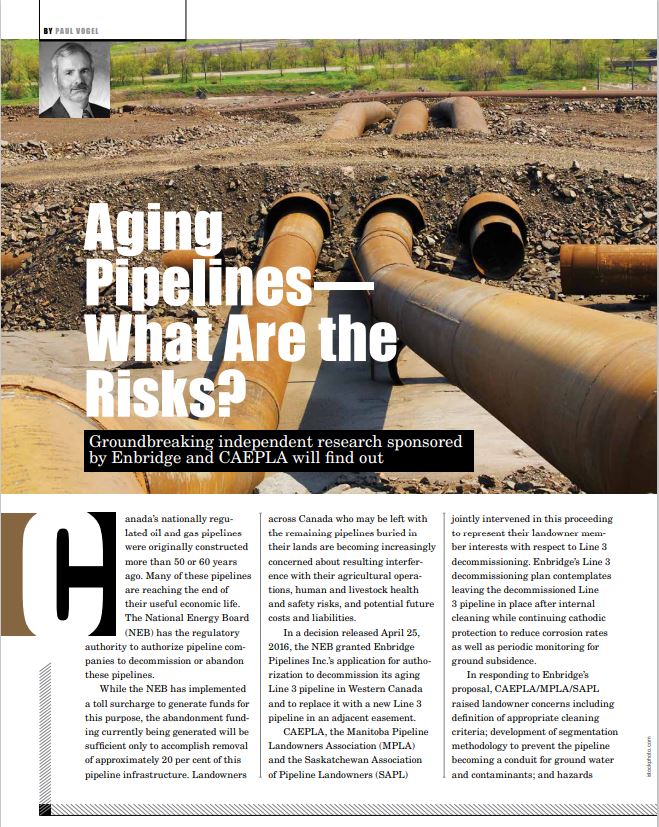 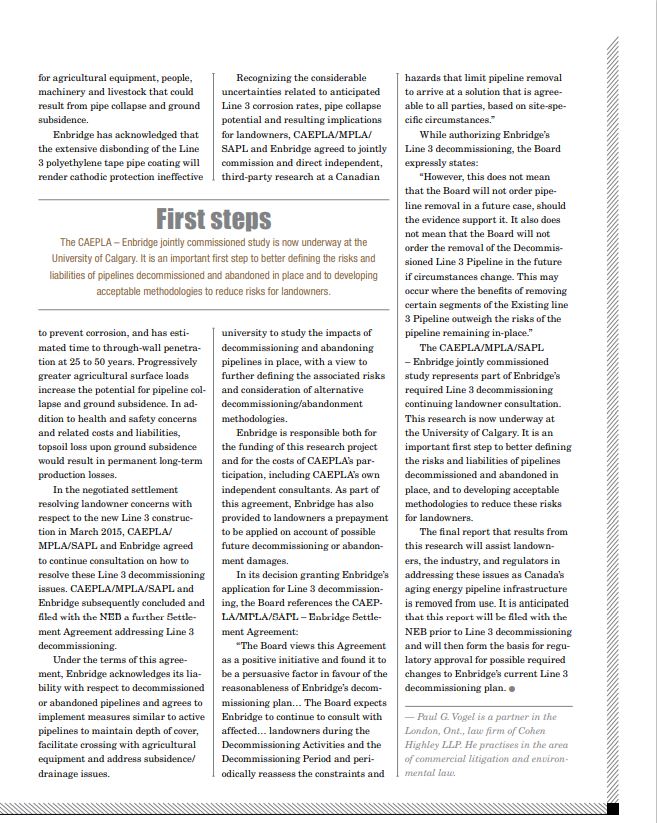