A Tale of Two Energy Companies

Manitoba Hydro likes to throw its weight around.

Enbridge is light years ahead of Manitoba Hydro when it comes to communicating and cooperating with landowners.

‘My learning curve was relatively easy because of MPLA and CAEPLA.’

Greg Lovatt was looking out over his farmland when he noticed something new: stakes had been driven into the ground. Lovatt, a cattle farmer, later learned that the mysterious appearances on his property this fall were the work of Manitoba Hydro.

But he had been given no heads-up—no explanation and no warning about the activity on his land.

“I thought about taking the stakes out,” Lovatt says. “I just wondered what was going on. To this day, I still don’t know what the stakes are there for.”

Not long after, and just as curiously, a pile of gravel was dumped in his fields.

“I was busy weaning calves and this pile of gravel caught my eye,” Lovatt says from his farm near Souris, Man.

“They didn’t tarp it the way (pipeline company) Enbridge does, so it doesn’t mix with the topsoil.”

Given the inquisitiveness of his livestock, the 59-year-old knew they would spread it around and play in it or get into supplies left piled on the ground.

To be safe, he confined the cattle for several days—going through six round bales of hay each day—while trying to figure out what Manitoba Hydro had planned for his land.

Lovatt has learned, however, trying to contact the company is often a “gong show.”

“I didn’t hear anything the day I called and, more than 24 hours later, I heard from the wrong person,” he recalls.

Fortunately, the right contact—when they finally connected—took full responsibility for Lovatt not being notified about work being done on his land.

Lovatt, a life-long farmer who runs a cow-calf operation and also works as a veterinarian, hopes to negotiate compensation for the incident and is cautiously optimistic of better days ahead dealing with the Crown corporation.

To date, however, Lovatt can see why some say “Manitoba Hydro likes to throw its weight around.”

One might say Lovatt’s dealings with the government power monopoly—which has a corridor for a transmission line on his property—compared to those with Enbridge, which has pipeline right of way on his land, really is the tale of two companies.

Alberta-based Enbridge, he says, is light years ahead of Manitoba Hydro when it comes to communicating and cooperating with landowners.

“Manitoba Hydro may have a difficult time existing if it were not a monopoly when it comes to its customer-service policy,” Lovatt says.

Both companies were on the land before Lovatt purchased it in 2003.

Several years later, Enbridge was back looking for more easement.

Lovatt says he is grateful to Manitoba Pipeline Landowners Association (MPLA) members for encouraging property owners to get together to deal with Enbridge.

“Being a new landowner, I thought I had nothing to lose,” Lovatt says.

“The abandonment issue was big for me. That’s what enlightened me to how serious pipeline issues were if they went the wrong way,” he explains. “I just bought this land and I paid a lot of money and I don’t want them to abandon it and devalue the property.”

Indeed, he had much to gain.

Lovatt credits CAEPLA and its provincial affiliate MPLA for educating him on his rights as a property owner.

“My learning curve was relatively easy because of MPLA and CAEPLA,” he says.

The organizations also helped him to establish “a good relationship with Enbridge,” which includes helping negotiate a compensation package with the company.

“We’ve always been approached when integrity digs or major projects are going through, and we have always been compensated appropriately,” he says of Enbridge.

“Enbridge has abided by the polices which were negotiated and tells me what it is doing, and I work with their needs and keep the cattle away. It’s a huge contrast with Manitoba Hydro.”

Besides shoddy communication, Lovatt says Manitoba Hydro has been guilty of sloppy work on his land, too.

“They pulled out an old pole on the road allowance and put in a new one, and I fell in the hole checking the fence,” Lovatt says. “You see that in a lot of public utilities or entities or municipal work—it’s all about getting the paycheque and not really about completing the job. They wouldn’t work that way on their own property or jobsite.”

Manitoba Hydro “needs some serious reorganization at the top and then on down,” he says. 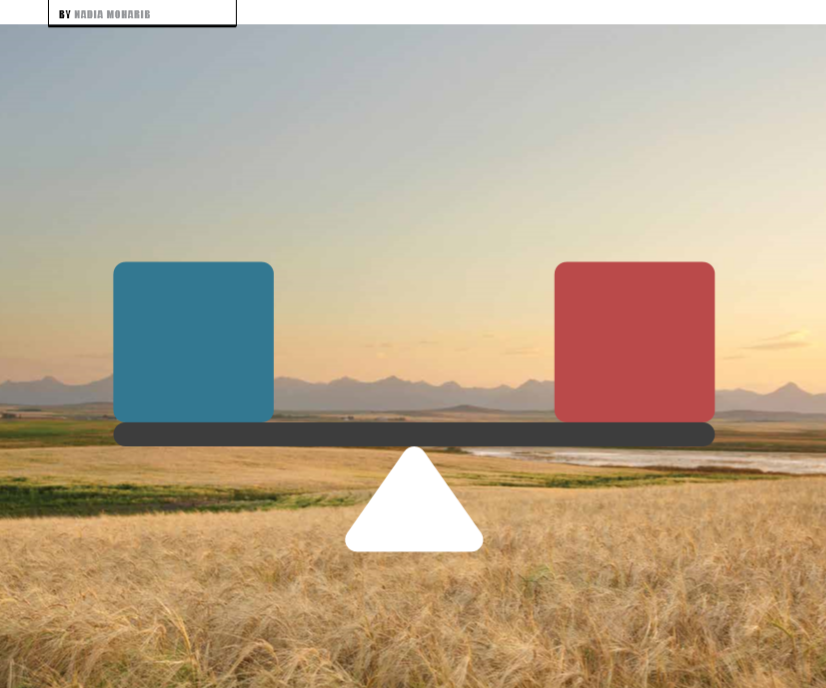 Nadia Moharib is a multimedia news reporter who loves to serve as a voice for an underdog and tell the story behind the story. Always curious, she seeks opportunities to make a difference.