A Primer On the Expropriation Regime in Manitoba

What landowners need to know about the authority of provincial governments

The Court of Queen’s Bench replied that this “might be viewed as tantamount to the re-introduction of feudalism, softened only by the requirement to pay for what is taken.”

The Public Works Act goes further, authorizing a designated minister to expropriate any property “that he deems necessary for any public work or purpose connected therewith, or for any public purpose of the government.” Ensuring that the government has very broad discretion, the Act’s definition of public work includes any property or work “that has been proclaimed by the Lieutenant Governor in Council to be a public work.”

However, the government’s discretion to take land is not unlimited. A 1978 case challenged the right of the Minister of Public Works to expropriate fossil-rich farmland in order to transfer it to the federal government to compensate for the flooding of fossil-rich federal parkland some 20 miles away, on a different river. The landowners argued that their land was not required for the purpose of the government work—i.e., the dam that would flood the federal land. The government argued that the decision to expropriate “was by way of exercise of ministerial discretion and so beyond reach of the Court.” It argued that the Minister could “take land when and where he will.”

The Court of Queen’s Bench replied that this “might be viewed as tantamount to the re-introduction of feudalism, softened only by the requirement to pay for what is taken.” It acknowledged that “the supremacy of the ministerial decision to expropriate has been repeatedly affirmed.” Nonetheless, it insisted that the power to expropriate “is not absolute.” There “should exist at least a reasonably direct relationship between the objective sought [and] the means employed to obtain it.”

In this case, “the decision to take the applicants’ lands can only be regarded as arbitrary.” If the decision was taken arbitrarily, “then in law that decision cannot be looked upon as one taken in good faith.” And so the court set aside the expropriation. The headnote to the case drew this lesson from it: The Minister’s “wide power does not mean ... that land can [be] taken by the Minister when and where he pleases.”

The same Manitoba court seemed to distance itself from this decision a decade later, citing the findings on ministerial discretion and ignoring those on its limits. That case involved an urban revitalization plan in Winnipeg.

As part of the plan, the Canadian National Railway Company, or CNR, agreed to transfer some of its land in the targeted area to a government-owned development corporation, in exchange for some other land that CNR could use for its own purposes, including development or sale. The replacement land was already privately owned, and would have to be expropriated. The province dispensed with a public inquiry, and the city went ahead with the expropriation, leading to a court challenge.

The landowners argued that their land was not required for any public work—that CNR would use the land for its own private purposes. The judge disagreed, saying that civic purposes included the sponsorship of land development. The land exchange was a component of the city’s development plans. The City of Winnipeg Act empowered the city to take any lands it deemed necessary for its purposes, and to dispose of any lands acquired to any person for the purpose of development.

The expropriation, the judge found, “was essentially a policy decision taken in what the Council of the City of Winnipeg perceived to be the broad public interest, namely to facilitate development and “’…to revitalize a neglected and underused area of the City.’ No doubt the City had to act within the bounds of its authority, but as long as it did so, and did not otherwise abuse its discretion, the expropriation could not be questioned.” 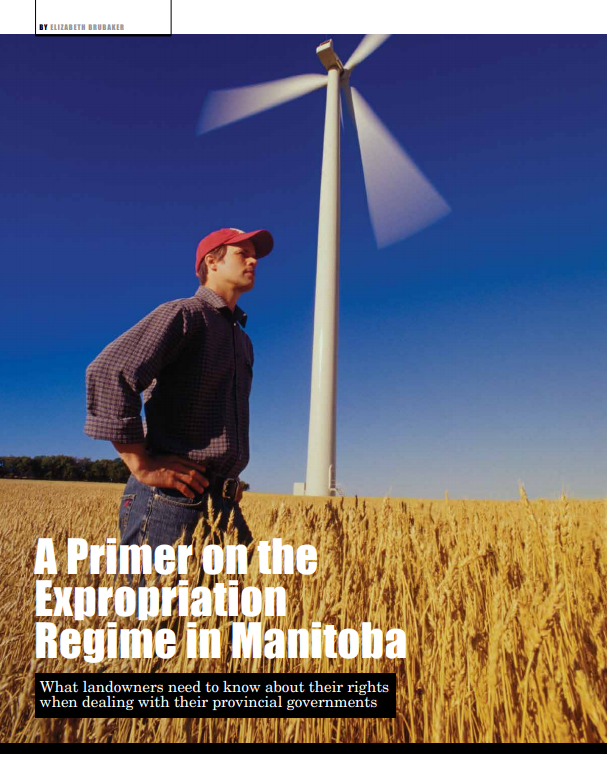 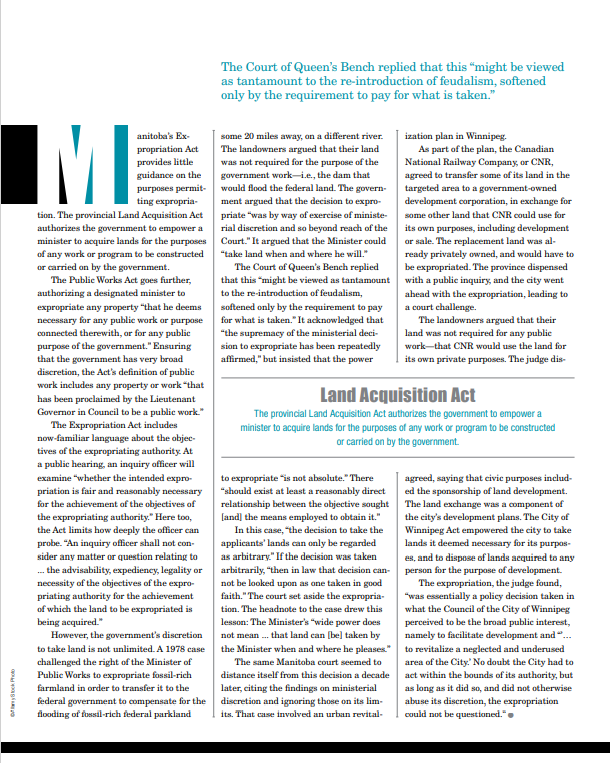