A New Era in Pipeline History

What landowners can do about Trans Mountain’s nationalization

Ottawa is in a profound conflict of interest: as the owner of this new energy transport Crown, it does not need to capture the regulator—government already owns it, too.

The nationalization of Trans Mountain (TMX) begins a new era in pipeline history. So, what can you, the landowner, say or do about it?

Demand all easement “agreements” be renegotiated, for starters.

Why? The National Energy Board (NEB) was purportedly an independent regulator—independent of government and industry. In reality, it acted as cover for government to provide industry with rent control via right of entry. There is a very high probability the easement on your land is there as a result of expropriation or the threat thereof.

The NEB and its enacting legislation never respected landowners or their property and human rights. Consequently, it compromised their land, businesses and families.

Ottawa’s regulator claims it is there for all stakeholders, and yet nowhere in the Act does it mention landowners—the directly affected.

The reference to “stakeholder” was designed to mislead landowners. To compromise their right to protect themselves and their property, and generally to submerge landowner rights among the interests of other parties, most of whom had no real skin in the game.

The same language and tactics have been co-opted by anti-pipeline activists to secure political influence in their fight to compromise the rights of industry and landowners.

With the Trudeau government’s nationalization of TMX there is not even a pretense of independence on the part of regulators. Ottawa is in a profound conflict of interest: as the owner of this new energy transport Crown, it does not need to capture the regulator—government already owns it, too.

Now politicians want to use their power to further compromise individual rights to fit their agenda.

Conservative Party politicians even want to expropriate the entire Trans Mountain corridor—including your land—for the benefit of Ottawa’s new pipeline company and, allegedly, to create jobs elsewhere in the economy.

Meanwhile the left, pandering to some Indigenous interests, wants to expropriate or at the least open up your property so they can examine your land for archaeological, heritage, historical or environmental reasons. Which will be a handy tool for activists if they want to suspend operations on your farm or ranch for political or other reasons.

Crown corporations are political entities and, as such, are easily manipulated for political purposes.

When politicians from both ends of the spectrum casually talk about expropriating whole energy corridors, no landowner with the Trans Mountain Crown on their property can rest easy.

Crown corporations are the worst offenders against property rights and the worst abusers of landowners.

The Canadian Association of Energy and Pipeline Landowner Associations (CAEPLA) has witnessed this in Saskatchewan, and more recently in Manitoba where its hydro utility, Manitoba Hydro, has brutalized landowners there for the past several years.

If landowners thought they were not respected and had no rights to fair treatment when Kinder Morgan owned the pipe, just wait until you deal with bureaucrats as the regulator, and now their close personal friends from Ottawa running the company.

The NEB would have been a big enough problem for TMX landowners, but the board managed to wear out its welcome even in Ottawa, and is being scrapped.

Ordinarily this would be good news. But the old adage “be careful what you wish for” applies here. The enactment of Bill C-69 means that, like the mythical Hydra, the NEB will be replaced by not one, not two, but three new regulatory bodies.

The last decade has seen much controversy and disruptive political intervention into the pipeline industry, to the point of paralysis.

Pipeline companies and their landowner partners have been caught in the crossfire. Companies cannot get new projects built, and even replacement projects—something demanded by most pipeline landowners to ensure safety and environmental integrity— have become difficult, if not impossible, to get done.

The only constant, the only reliable friend pipeline landowners and energy corridor residents have been able to count on is CAEPLA.

CAEPLA fought shoulder to shoulder with landowners against predatory regulators looking to privilege industry at your expense. We negotiated landowner contracts that created safer pipelines that respected your property rights and environmental stewardship responsibilities.

We then helped pipeline companies get regulatory approvals and government approvals on projects when—and only when—those projects embraced landowners as partners and deployed cutting-edge technology that prioritized safety and environmental integrity. Enbridge’s Line 3 Replacement Program (L3RP) is one such project.

It is because of CAEPLA’s proven success, experience, reputation, credibility and integrity that we urge our fellow pipeline landowners on TMX to take a close look at L3RP.

Trans Mountain landowners deserve better. Better than an aging, leaky pipe on their property. Better than archaic, unfair easement “agreements” from more than half a century ago. Better than threats of expropriation. Better than an incompetent and chaotic Crown corporation in their backyard. Better than taking a back seat to green activists. And better than the new Canadian Energy Regulator that will cater to everyone but pipeline landowners.

The energy transport industry has entered a new era. So far, none of it is good. But together we can change that.

If you are a pipeline landowner, especially on TMX, and feel you deserve better, we are at an exciting point in pipeline history. This is your time. This is your opportunity. 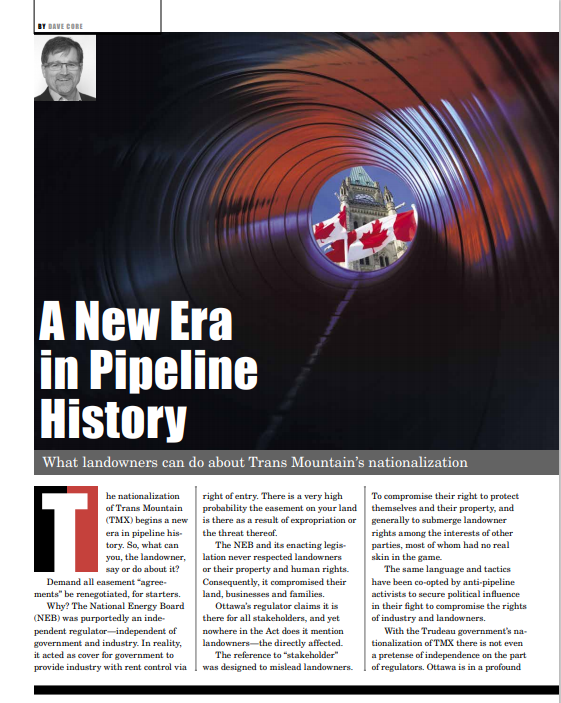 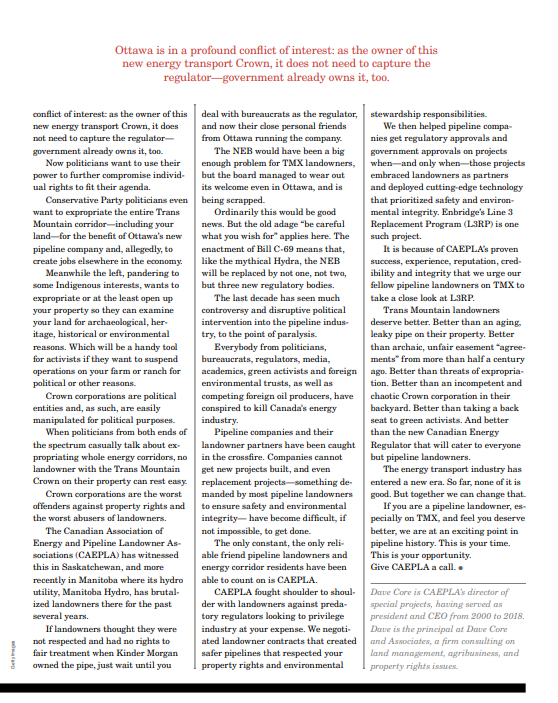 Dave Core is CAEPLA’s Director of Special Projects, having served as president and CEO from 2000 to 2018. Dave is the principal at Dave Core and Associates, a firm consulting on land management, agribusiness, and property rights issues.