‘You Are Now on Treaty Land’

“Why are people referring to land that was surrendered more than a hundred years ago as treaty land?”

I recently attended an event that began with the announcement: “You are now on treaty land.” By now, we are all familiar with this new way of commencing public functions. It stems from a recommendation from the Truth and Reconciliation Commission.

The claim is that such announcements will be a step in the direction of reconciliation between Indigenous people and the mainstream.

But this new procedure has clearly been designed to signal a new way of looking at treaties, and is meant to accomplish more than being a novel way to begin an event.

With a view to gaining a better understanding of the significance of this new greeting, I listened to a CBC interview with a person who described himself as a “treaty official.” He explained that when new immigrants come to Canada he meets with them and tells the bewildered arrivals that their new country is, in fact, “treaty land,” and they will be expected to honour the treaties and “share the land.”

Clearly, a radical new way to interpret treaties has been proposed. And it is wrong.

With the exception of Indian Reserves, as defined by the Indian Act, the Prairies are not “treaty land.” The land was surrendered long ago, for an agreed-upon amount of compensation, by the Indigenous people who had hunted on it.

Here is the essential history of the Prairie treaties:

The treaties that are referred to as the “numbered treaties” were negotiated after the enactment of The Indian Act in 1876. In each case, negotiators sent by Ottawa met with the groups affected and successfully reached agreements whereby the land was surrendered to the Crown on terms that included compensation.

Land was set aside for reserves. The Indigenous people had a choice of living on a reserve, or entering the mainstream and living like any other Canadian. Hunting and similar rights were stipulated.

The monetary compensation is paltry by today’s standards, but the fact is that $5 per person per year was a significant amount of money then. Both parties agreed to the terms. Today, Treaty Day is an annual celebration in some Indigenous communities, with $5 bills distributed by people dressed in the garb of yesterday.

The numbered treaties are straightforward documents. Although they were written in the late 19th and early 20th centuries, the language is understandable to the modern reader. Anyone can access them and read them. Although people who set themselves up as “treaty experts” do their best to baffle with talk of the supposed complexity of the treaties, any intelligent reader can quickly glean their actual meaning.

Despite the highly fanciful interpretations people with a vested interest attempt to make, there really is no ambiguity on the nuts and bolts of the documents. The land was surrendered for compensation. People who purchased the land in good faith have their title free and clear. This goes for the government as well. People who haven’t read the treaties should do so, and form their own opinions.

So, the question is: what is going on? Why are these people referring to land that was surrendered more than 100 years ago as treaty land?

The answer is that “You are now on treaty land” is part of a slick marketing campaign, with clear financial goals. That campaign received a major boost from the Truth and Reconciliation Commission.

The catchphrase of the campaign is “share the land.”

The Indigenous elite has teamed up with very expensive lawyers to promote this campaign and flood the courts with alleged breach-of-treaty cases. But they don’t want the treaties interpreted—they want them rewritten. And the rewriting they want is to have treaties made into laws forcing everyone to “share” land that they already own.

By itself, that phrase, “share the land” sounds quite innocent. It is good to share. And, in fact, we all do share the land, in the sense that we all have access to national and provincial parks, highways and the like. But, we share private land only if we want to.

If I tell my neighbour that I want to share his land, he is free to show me the door. For that matter, if I show up at a band office in an Indigenous community and announce that I want to share the land by building a house on their property, I will get the same treatment.

And yet, that is exactly what the clever “share the land” campaign is all about. If the campaign is successful, regardless of whether the land is publicly or privately owned, the land will have to be surrendered, or an annual rent extracted in perpetuity from the hapless owner.

If this sounds a lot like “protection money,“ that’s because it is.

What is as surprising as the fact that such an audacious scam should be attempted on the Canadian public, is the fact that the campaign is not only being taken seriously in some quarters—it is actually succeeding. The current federal government has shown that it is certainly not prepared to stand up to the multitude of demands from Indigenous activists, and some judges seem prepared to abandon their proper role of interpretation, and do the rewriting that the activists demand.

Meanwhile, the treaties that courts have rewritten do not solve the major issues of poverty, underemployment and lack of opportunity in Indigenous communities, but exacerbate the dependency.

A privileged few benefit. Mainstream Canadians—Indigenous and non-Indigenous—pay for all of this as they watch needed resource development stalled and tax dollars misspent.

The “share the land” campaign should be seen for what it is—a cash grab by attempting to rewrite history.

But, perhaps the most destructive aspect of the “share the land” campaign is the dependence it has spawned. Instead of directing their energies to jobs and careers, young Indigenous people may be told that new treaties are the answers to their problems. This is nonsense, and the leaders and politicians know it. New treaties will make a privileged few richer, but will do nothing to solve problems like chronic poverty and underemployment.

The politicians and leaders are playing a cynical game.

I mentioned the newcomers to the country who are required to listen to an advertisement for this dishonest campaign. We should bear in mind the fact that they have come to a country that has assured them that they will be treated as equals here. What will they think of this treaty official’s spiel, and the idea that one group of people should have rights superior to theirs simply by virtue of race?

Or maybe we don’t have to worry about them, after all. They will figure it out. Many of them come from hard countries and they know a shakedown when they see one.

These are people who are prepared to work hard to acquire what they need, and they expect others to do the same.

So, the next time we are told that we are on treaty land, maybe we should say, “No, we are in Canada, and we are all lucky to be here.” 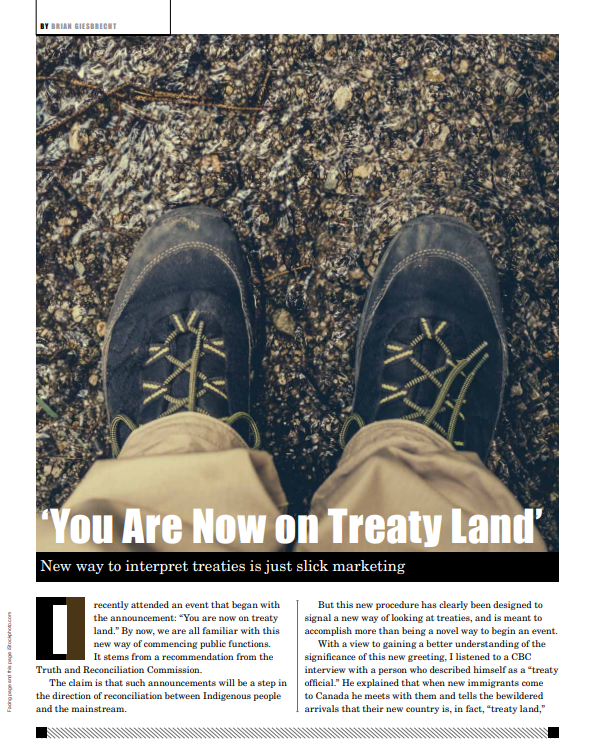 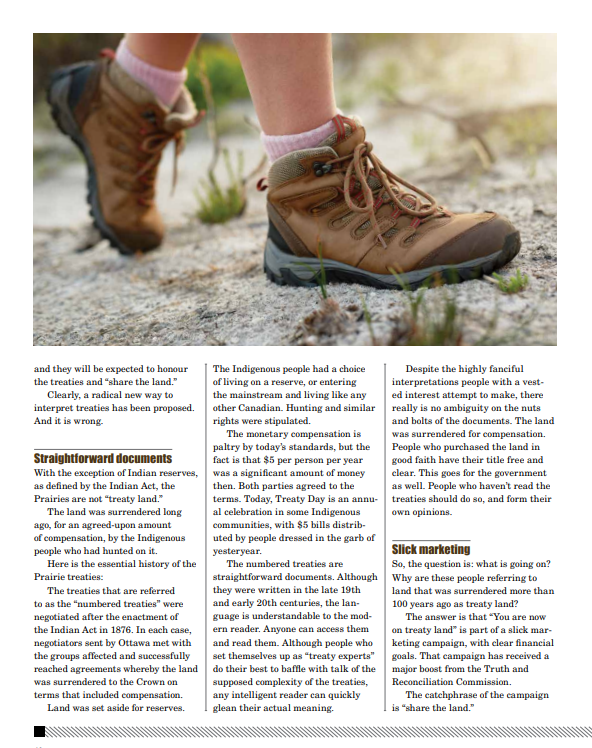 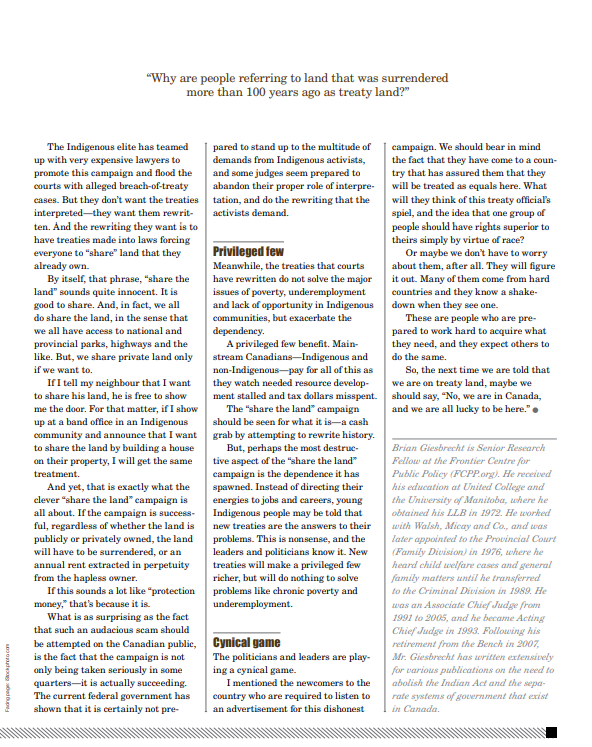