'The bill for spills': U.S. lawmakers propose tax on oilsands that could cost Canadian oil producers US$665M over ten years

The Biden Administration is looking to raise revenue by increasing import taxes on bitumen from Canada.

The levy, expected to generate at least U$665 million, is supposed to fund oil spill clean ups.

CALGARY – A bill that would impose an additional tax on Canadian oilsands crude could emerge as a new flashpoint between Canada and the United States.

On Mar. 8, Earl Blumenauer, a Democratic member of the House of Representatives from Oregon, and Ed Markey, a senator from Massachusetts, introduced a bill that aims to slap an excise tax on oilsands crude to be paid into a fund for cleaning up oil spills. That could amount to a 5.5 U.S. cents tax on a barrel of oilsands crude, according to Canadian energy lawyers and industry observers.

The U.S. Internal Revenue Service ruled in 2011 that oilsands crude is not technically considered crude oil and therefore not subject to an excise tax, but Blumenauer’s bill seeks to amend the language in the tax code to specifically label oilsands products as crude oil once again.

“The facts are clear: we are in a climate emergency and must take action. It is past time we hold fossil fuel polluters accountable for the impact they have on the environment,” Rep. Blumenauer said in a release, adding that the excise tax would generate US$665 million in additional taxes for the U.S. government over 10 years.

“We cannot allow any oil company to evade the bill for spills,” Sen. Markey said in a release.

The Tar Sands Loophole Elimination Act is still in its early stages but has won the backing of influential members of Congress including Senators Bernie Sanders and Elizabeth Warren, and from the House’s Natural Resources Chairman Raul Grijalva.

Canada is the largest exporter of crude oil to the United States, shipping 3.63 million barrels of petroleum products to U.S. refineries daily last week, according to the U.S. Department of Energy.

“The hundreds of millions of Americans who depend on Canadian oil should know that such a move would ultimately result in their paying this tax at the pumps,” Bal said in an emailed statement.

Natural Resources Minister Seamus O’Regan’s office declined to comment on the bill, citing a policy of not discussing domestic legislation in another country.

Faced with a rising tax bill for its members, the Canadian Association of Petroleum Producers, said it wants a tax policy in the U.S. that “is not discriminatory toward the Canadian energy sector.”

“We’ll continue to support efforts to open the door for collaboration with (U.S.) President Joe Biden and his administration in this vein,” Ben Burnnen, CAPP vice-president, fiscal and economic policy, said in an email. CAPP members include Canadian Natural Resources Ltd. and Suncor Energy Inc., the two largest oilsands producers.

Markey has introduced a version of this bill several times in recent years without it passing into law, said Edouard Markson, a partner in tax law at King & Spalding LLP in New York, “but the political winds have shifted in the last few months,” under a progressive Democratic administration led by Biden focused on climate change.

"There were great pains taken in negotiating the Canada-U.S. free trade agreement to ensure that bitumen would be freely moveable through the continent"

Markson said that every barrel of crude oil produced in the U.S. is currently subject to a 9 U.S. cents per barrel excise tax and this bill aims to level the playing field.

“We (in the U.S.) have this weird statute where we divided the world into petroleum products that are taxable and that are not taxable,” Markson said.

The Canadian oil industry currently pays roughly 3 U.S. cents per barrel excise tax on diluent, a lighter oil used as a blending agent to lighten the viscosity of oilsands bitumen so it can flow through a pipeline, according to Canadian energy lawyers. When that diluent is added to the bitumen produced in the oilsands, the resultant product is called dilbit. Every barrel of dilbit is a mix that’s roughly one-third diluent and two-thirds bitumen.

Blumenauer’s bill would be “an additional burden,” as it will also tax the bitumen in the barrel, which “further erodes the economics” of selling oil to the U.S., said Vivek Warrier, partner and co-lead of the national energy industry team at Bennett Jones LP in Calgary.

Suncor and Cenovus Energy Inc. declined requests for comment and CNRL did not provide a response before press time.

In total, Warrier said the new excise tax would bring the total tax burden on every barrel of dilbit sold into the U.S. up to roughly 9 U.S. cents — a significant tax burden that his clients in the oilpatch are considering challenging under USMCA rules.

“There were great pains taken in negotiating the Canada-U.S. free trade agreement to ensure that bitumen would be freely moveable through the continent without having to pay any kind of tariff and certainly this excise tax could be interpreted as such,” Warrier said.

Article 2.4 of the new USMCA trade agreement states that “unless otherwise provided in this Agreement, no Party shall increase any existing customs duty, or adopt any new customs duty, on an originating good,” said Mark Warner, principal at MAAW Law in Toronto, adding that the Blumenauer’s bill may not be permitted under the agreement.

Despite cordial relations between Prime Minister Justin Trudeau and President Biden, the energy-trading relationship between Canada and the U.S. has been strained in the early weeks of the Biden’s government. The new U.S. administration cancelled TC Energy Corp.’s Keystone XL pipeline project as one of its first acts in office, meanwhile, Enbridge Inc. is fighting an order by Michigan’s governor to shutdown the Alberta-to-Ontario Line 5 pipeline through Michigan that could disrupt oil supplies to Eastern Canada and the United States. 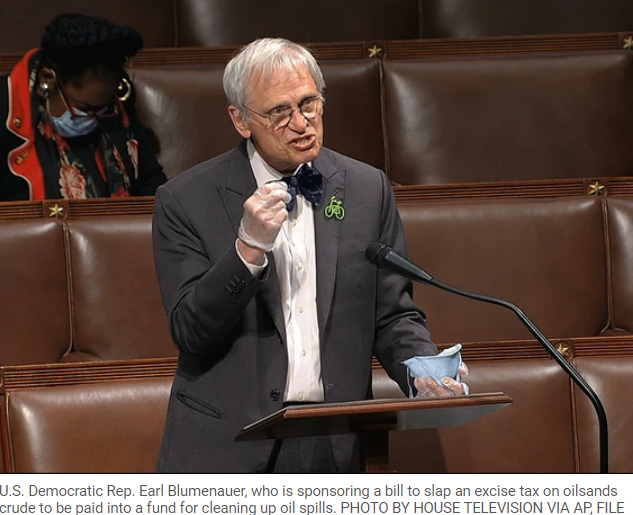