“Not only is there ambiguity, confusion, and disagreement over what constitutes aboriginal traditional knowledge, there is also ignorance about Canadian traditions like property rights, free markets, and the rule of law.”

“The term ‘indigenous’ appears 344 times...By comparison, the term ‘landowner’ appears 53 times, and the term ‘property rights’ does not appear a single time.”

In the report, the first reform proposed in the executive summary is with respect to governance: “Ensuring the Board’s composition is diverse and has sufficient expertise in relevant fields such as environmental science, community development and Indigenous traditional knowledge.”

Indigenous knowledge is a key theme throughout the report. In fact, the term “Indigenous” appears 344 times throughout it. By comparison, the term “landowner” appears 53 times; the word “property” appears three times and the term “property rights” does not appear a single time.

According to the Canadian Environmental Assessment Agency (CEAA): “All cultures have traditional knowledge. In this broad context, ATK (Aboriginal Traditional Knowledge) can be viewed as knowledge that is held by, and unique to, Aboriginal peoples. Although there are many different definitions of ATK in the literature, there is no one universally accepted definition. For this reason, no official definition of ATK has been provided in this document.”

The content of Aboriginal knowledge is, therefore, unknown to us. But since whatever knowledge it is is supposedly known uniquely to Aboriginals, the same government document explains: “Only the community can decide if they are willing to provide access to their ATK. …In seeking consent, (Environmental Assessment) practitioners should work closely with the community to clearly set out who owns the knowledge.”

While First Nations certainly have distinct cultures, is it true that they have distinct, secret knowledge that only they possess? Can knowledge even be possessed? What knowledge of reality could possibly be unique to any single people and inaccessible or unknowable by others? To take an analogy, there exists Italian poetry and Jewish literature but not Austrian mathematics or Catholic physics. Why is this?

As Frances Widdowson recently pointed out, “The use of the ‘Western’ adjective in conjunction with science [in the report] is also perplexing in that science is a universal method that can be used, regardless of one’s ethnicity, to increase empirical knowledge and theoretical understanding. To juxtapose and elevate traditional knowledge in this way is to claim that indigenous peoples have unique insights inaccessible to others.”

Traditional knowledge, whatever it is, must concern the latter category of values and norms. That is meaningful. That is the level of culture, narrative and spirituality.

So it should not be considered offensive to ask just how First Nations could be able to “provide relevant biophysical information, including historical information that may otherwise have been unavailable.”

It is generally understood that much of traditional knowledge has been handed down orally. As with any culture, oral histories involve an interpretative process of deciding what is most relevant. Culturally speaking, biophysical information as historical data for scientific and environmental purposes does not seem like the kind of thing handed down orally for generations.

Adding to the ambiguities is the term “duty to consult” which makes appearances throughout numerous legal cases. According to the expert report: “The framework and procedures for determining who is a formal agent of the Crown for the purposes of consultation with Indigenous peoples are unclear, and existing rules are implemented inconsistently. All parties agree that someone must assume this role. We need to decide who that someone is, and move forward.”

Indeed, countless delegates are involved in the process for every interested party.

Not only are there ambiguity, confusion and disagreement over what constitutes Aboriginal traditional knowledge, there is also ignorance about Canadian traditions like property rights, free markets and the rule of law.

Rather than reviewing our tradition of universal human dignity and capacity for knowing reality, free and fair business negotiations and a robust defense of private property, we have a confused concept of consultation and a disorienting “duty to consult.”

There is no reason for any knowledge of our environment, or anything else, to be esoteric, secret knowledge. And belonging to a particular culture does not automatically imply that a person has scientific knowledge of reality.

Sadly, purported respect for Aboriginal traditional knowledge by bureaucrats and lawyers is too often a misguided form of affirmative action. Aboriginals deserve to be treated as equal partners in scientific inquiry with whom we seek the truth about reality. Since the proper criteria are truth and facts, we should equally reject falsehoods whether they are found in “Aboriginal traditional knowledge” or so-called “Western science.” Likewise, we should affirm truth wherever it is found. This is what it means to treat people as equals.

It’s time we stop dealing in unknowns and consult the facts and principles we do know. 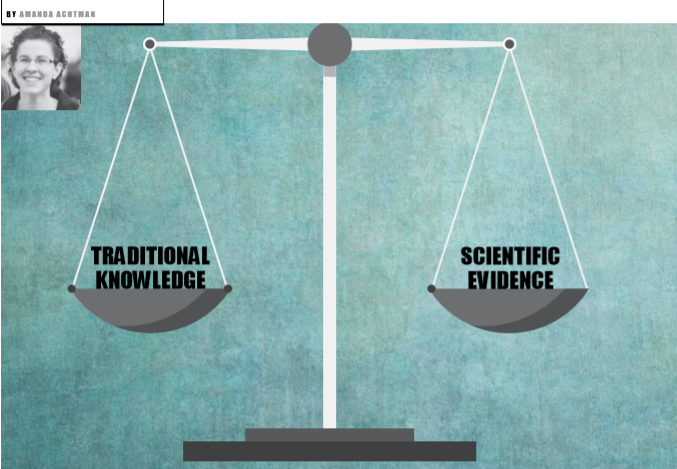 Amanda Achtman is associate director, Public Policy and Communications, with Manitoba Forward. She holds a BA in political science and is currently pursuing an MA in philosophy. She has worked at the Frontier Centre for Public Policy, and participated in seminars on economics hosted by numerous institutes, including: the Acton Institute, Mises Institute, and the Foundation for Economic Education