Marsha Rempel wants to save her 150-year-old farm — the only home she's ever known — and is fighting the City of Welland's decision to expropriate the lands for industry.

Rempel, 57, is the fifth generation to live on her family's crop farm, which she says is endearingly known as the place with "the big red barn" that prompts tourists to park and pull out a camera.

"It's been home my whole life," she said of the farm in Ontario's Niagara Region. "It's like it's part of your lineage. It's part of your heritage. It's roots. They don't understand the roots aspects of this."

The city wants to build an industrial park on the land, which sits between two railway lines and Ridge Road and Highway 140. The biggest parcel is a 24-hectare (60-acre) field, along with about 2.8 hectares (seven acres) on the south side of the railway.

City council approved a bylaw to expropriate the land in a close vote at a Dec. 1 meeting. Six councillors and Mayor Frank Campion voted in favour, while five were opposed.

The city said it supports the manufacturing sector by strategically locating lands close to the Highway 406 and Highway 140 corridors. If a property owner doesn't want to sell, the city said, it moves forward with expropriation, allowing it to purchase the land.

Steve Zorbas, the city's interim chief administrative officer, said there's a great demand for land that is service ready. Rempel's property is zoned for industry as part of the Niagara Gateway Economic Zone and has been for years, he said.

"[Our] priorities are to create new jobs for the city of Welland, and it's the best fit for us right now."

Zorbas said the city has talked to the owner on three occasions. Rempel said she has refused to sell the land for three years and called the city's pursuit akin to acting like "schoolyard bullies."

Coun. John Chiocchio, who opposed the decision to expropriate, said before the December vote that "integrity sometimes [is] worth more than money" and that he was "dead against taking someone's land."

City council took a first step toward voting on expropriation at a meeting in July 2020 by approving housekeeping measures.

Coun. David McLeod said no one wants to remove someone from their land, but the owner would be financially compensated and the contribution to the city would be "far greater."

"[The city's] money is not going to replace what was lost," Rempel said, noting she hadn't had any discussions about dollar amounts. "You can buy another house. But you cannot buy another home, and there's a difference."

Rempel said she remembers her grandfather farming oats, red clover and corn on the land, back when it was known as Watters Farm. The farm now rotates between soybeans and winter wheat.

"I'm just afraid that they're going to take this farm, they're going to ruin that field and it's going to become surplus land," she said, pointing to land in Pickering, Ont., east of Toronto, that was seized by the federal government in the 1970s for construction of an airport that never happened.

After a notice of application to expropriate the land has been served, an owner can request a hearing at which the city must demonstrate that the action is "fair, sound and reasonably necessary," the city news release says. It notes that after the hearing, the inquiry officer prepares a non-binding report that is then voted on by council.

Zorbas said it appears a hearing will take place because no agreement has been reached, and he expects a report to be presented to council for consideration in the fall or in 2022, depending on how the COVID-19 pandemic affects proceedings.

The timeline for an approved expropriation process, the news release said, can range from several months to several years.

At the July meeting, Coun. Graham Speck, who seconded the initial motion, called it a tough decision but one that was being made for the "greater benefit" of Welland residents seeking stable, local jobs. But in December, he opposed the motion to expropriate.

Rempel said industry is saturated in Welland, and she is concerned about vanishing farmland, adding she thinks the move reflects how food and farmers are taken for granted.

A local community development group has started an online petition in support of Rempel, and copies are available in the farm's mailbox. She said hundreds of people have shown their support.

Rempel said while she can't eat or sleep over the thought of losing her farm, she'll oppose expropriation until the end.

The expropriation will be discussed again at a council meeting on Tuesday. 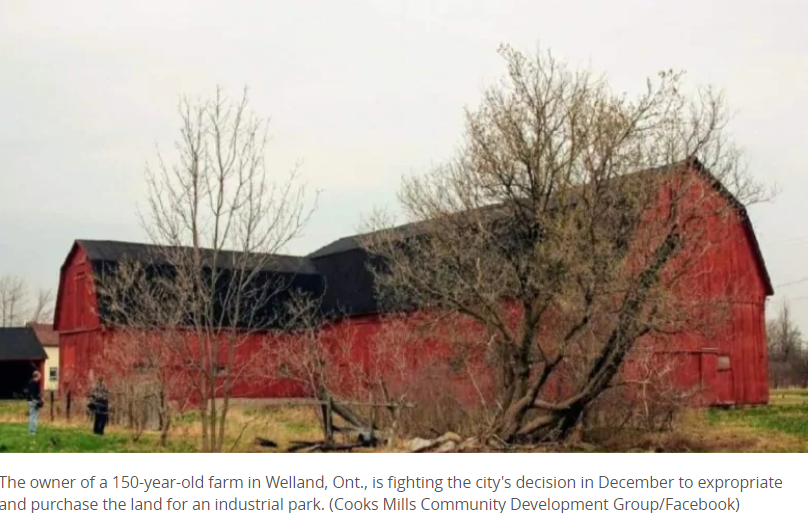