With the pipeline fiasco, Canada has now come face to face with the ultimate and disastrous consequences of the grand coalition that has seized control of national policy-making.

The Trudeau government’s desperate decision to ultimately purchase the Trans Mountain pipeline — for the alleged “fair price” of $4.5 billion — is the logical outcome of an incoherent governance regime controlled by a triumvirate of social, political and economic institutions.

The institutional troika is made up of green activists, pandering politicians and capitulating corporations. All are jointly and severally responsible for creating the current legal and economic crisis over Canada’s energy and resource developments, with many more crises to come.

The country’s economic future is now in the hands of this trio of power-wielding forces that are gradually coalescing around ideas that aim to strangle Canadian economic development in the name of environmental protection. It started decades ago when the allure of socialism faded and the prospect of green power emerged as the next big political power game at the United Nations and elsewhere.

Over the past few days, members of the green troika were actively pushing their similar if not identical themes.

In the green camp, long-time activist Tzeporah Berman appeared on CBC Radio’s The Current on Monday to declare that Kinder Morgan’s Trans Mountain pipeline is “the last gasp of the fossil fuel industry.” Berman, who once acted as an oilsands adviser to Alberta’s NDP government, has compared the oilsands to the fiery fictional wasteland of Mordor in Lord of the Rings. She also supported B.C. Premier John Horgan’s campaign to kill the Trans Mountain pipeline project.

During the same segment of The Current, Martha Hall Findlay, CEO of the Canada West Foundation, didn’t disagree on the ultimate objective: “Tzeporah and I are going to disagree on some things, but I think where we would agree is if we could have a world tomorrow with zero greenhouse gas emissions, that would be fantastic.”

Fantastic for whom, Findlay didn’t say. Certainly not for the foundation of Canada’s west, although her views reflect the official position of most of Canada’s supplicant corporate sector, including major institutional investors, financial firms and energy companies. For at least two decades, Canada’s corporate leaders — including those in the oil sector — have been coddling environmentalists and playing along with the activists who are out to destroy the oil industry. Scores of corporations — including such energy players as Cenovus, Suncor and Shell Canada — have given their official imprimatur to carbon taxes and other elements of carbon control. Corporate Canada’s long flirtation with environmental activists is one reason Alberta’s energy industries are now caught in an existential crisis, with no end in sight. That’s what happens when you endorse your enemies’ objectives.

Corporate Canada’s flirtation with environmental activists is one reason Alberta’s energy industries are caught in an existential crisis. That’s what happens when you endorse your enemies’ objectives

The latest indication of corporate capitulation at the feet of the green movement came this week from the Canadian Coalition for Good Governance, a collection of major pension and investment funds — mostly government- and bank-controlled — which laid out a set of guidelines on how corporate directors should deal with their companies’ environmental and social responsibilities.

Following the lead of assorted international activist movements and agencies — the Sustainability Accounting Standards Board, the global Climate A List, the UN Global Compact LEAD and others — the Canadian coalition called on directors to assume active oversight of corporate environmental issues, including climate change. Among the concerns are “energy system risks, extreme and variable weather events, and changing consumer behaviour.” The guidance document assumes directors and corporate officers are in a position to evaluate climate science.

The governance coalition failed, however, to identify the biggest risk of all, a concept highlighted Tuesday by Michael Ferguson, Canada’s auditor general: “Incomprehensible failure” on the part of government. Ferguson was describing his office’s report on the serial bungling and self-serving arse-covering behind the federal bureaucracy’s massive Phoenix payroll disaster. Ferguson also detailed federal bungling of Montreal’s Champlain Bridge project. Both the Phoenix and the Champlain Bridge reports highlight the tendency of government agencies and politicians to play games and protect themselves while failing to take into account warnings of rising costs and inadequate preparation.

For his next report, Ferguson could take a look at Finance Minister Bill Morneau’s official “Backgrounder,” released Tuesday, which claims to provide “Details of Agreement for the Completion of the Trans Mountain Expansion Project.” The short 1,000-word document contains no real details of any element of the government’s decision to buy into the pipeline, no risk assessment, no probabilities and no plan.

Perhaps Canadians can also count on the Coalition for Good Governance to take up a review of the Trans Mountain purchase. Or maybe not. There is constant speculation that the ultimate buyers of the pipeline will include any number of Canada’s major pension funds, including the Canada Pension Plan Investment Board, the Ontario Teachers’ Pension Plan and other members of the good-governance coalition. Will the Trans Mountain pipeline, once in government hands or some form of public-private partnership, meet the environmental-stewardship standards set in the coalition’s new environmental and social policy guidelines?

At that final stage of approval for Trans Mountain, if it ever gets there, the full power troika will be at work: Green activists, pandering politicians and Canada’s corporate guardians will have to hack their way to what at this stage looks to be a predictable disaster — ready for Michael Ferguson’s auditors. 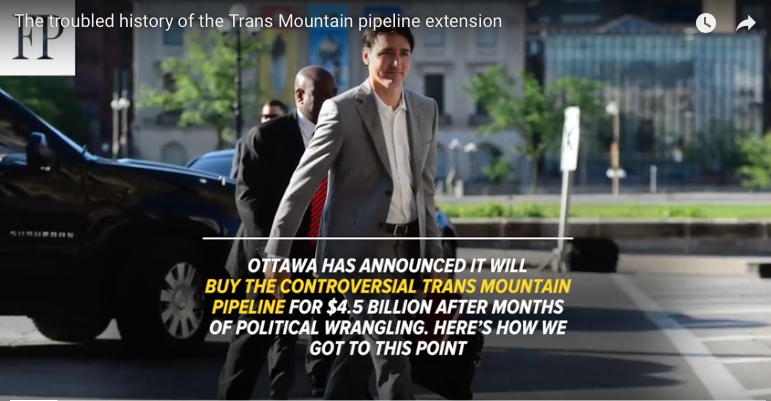