This conflict could have been prevented through recognition and protection of property rights—of both the Inuit protesters, and the company.

The mining sector could learn a lot from the pipeline landowners movement when it comes to respecting property rights and crafting 'win, win' business agreements—whether for coal mining in the Alberta Rockies, or for iron mines on Baffin Island.

'We recognize the Inuit as the rightful custodians of this land,' say group of employees in open letter

CBC has obtained an open letter written by a "sizeable minority" of Mary River mine employees currently stranded in Nunavut by a protest, which says they recognize Inuit as "rightful custodians of the land."

About 700 staff from southern provinces have been stranded at the Nunavut mine site since a group of protesters staged a blockade last week, blocking roads and the airstrip. The protesters object to Baffinland Iron Mines Corporation's proposed expansion of the mine and fear the impacts it could have on the water and surrounding areas.

CBC has verified the letter's authenticity and agreed to the mine workers' anonymity. The letter has been edited for style:

This is an open letter to the protesters at Baffinland Mary River mine site from a group of employees at the mine.

Our managers have cautioned us that speaking out about this publicly will likely result in termination, and so this letter must remain anonymous.

We are writing to express our full support for the efforts, means and goals of your protest. We do not pretend to represent the views of the majority of Baffinland's workers, but we do represent a sizeable minority.

We recognize the Inuit as the rightful custodians of this land, and as the people who should make the decisions about how it is used.

Your protest has generated a lot of conversation among the workers here. Many of us are disappointed that our flights to return home were postponed, but some also consider it a small thing compared to the hundreds of years of colonization and cultural erasure that Indigenous people have experienced — and continue to experience — at the hands of the Canadian government and the private sector.

This country has seen the consequences of entitlement and greed that have led to the destruction of the land for profit, and we are glad you are fighting for autonomy over your land.

You've said that it is not the workers you are upset with, but the Baffinland executives, and we would like to say that our support is also not with our superiors in the company, but with you.

On many occasions we've looked around at the massive piles of iron ore surrounded by miles of rusted snow, the colossal diesel tanks and the clouds of exhaust fumes that hang above the camp and thought, "What the hell are we doing here?"

We firmly believe that the company should listen to your demands and give you what you want, though even that will likely not be enough. With the horrible history that has taken place in this country, and the ways in which your voices were silenced in the process, what could be enough?

Despite the injunction that is now forcing you to vacate the airstrip, we hope that you go on to succeed in your goal to prevent Baffinland's phase two project to double their output and build a railway.

This expansion would obviously affect the wildlife and ecosystem in the surrounding area, which would be another step in erasing your means of sustaining yourselves through hunting. We see the importance of protecting the way of life that you've practised for thousands of years.

A message to the public just learning about this: workers at Baffinland are safe, and have not been in danger at any stage of this situation.

The protesters said from the start that they would let flights leave in cases of emergency. We have enough food to last us a very long time, and while we are disappointed with our cancelled flights, as stated earlier: it is nothing compared to the importance of listening to these peoples' voices as they fight to protect the land and their culture. 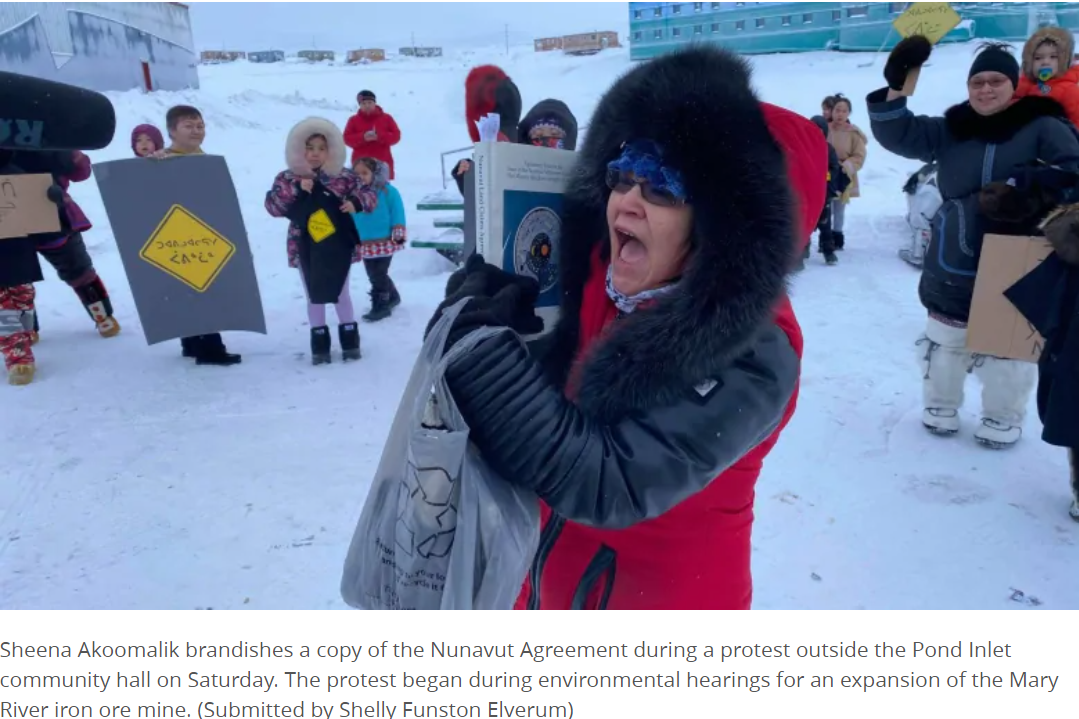