Coastal GasLink says more than 500 pipeline workers are stranded after a Wet'suwet'en Nation clan set up three blockades along the only access road to two work camps in a remote part of northern B.C.

The company says supplies at the camps will run out in the coming days, water is begin conserved, and workers won't be able to reach medical care in an emergency because of the "illegal blockades."

"Unlawful actions ... have put our people in danger," Coastal GasLink said in a statement.

On Sunday, the Gidimt'en Clan of the Wet'suwet'en Nation told Coastal GasLink it would enforce the eviction of pipeline workers from its traditional territories near Houston, B.C., about 1,000 kilometres northwest of Vancouver.

According to the Gidim'ten Clan, an enforcement notice, issued at 5 a.m. PT Sunday, provided an eight-hour window for CGL workers to leave before the access road was blocked.

Jennifer Wickham, media co-ordinator for the Gidimt'en checkpoint, which monitors access to part of the territory, says the route on the Morice River Forest Service Road is now impassible for all vehicles, including supply trucks.

Wickham said the blockades were set up to halt Coastal GasLink's plans to drill under the Wedzin Kwa (Morice River).

B.C. Minister of Public Safety and Solicitor General Mike Farnworth said the blockades have "put at risk emergency access and the delivery of critical services" to hundreds of Coastal GasLink workers.

In a written statement Monday, Farnworth said the blockades are endangering dialogue and "good faith commitments" between the Office of the Wet'suwet'en and the province, and also breach a court injunction against blocking access to pipeline worksites.

"The right to protest does not extend to criminal actions," Farnworth said.

Coastal GasLink says it is "committed to dialogue" and notes the pipeline project is fully authorized and permitted by government and has the support of all 20 elected band councils across the pipeline route.

But Wet'suwet'en hereditary chiefs have opposed the project, saying band councils do not have authority over land beyond reserve boundaries.

About 5,000 workers working across northern B.C. are halfway through the construction of the $6.6-billion pipeline.

It's designed to carry natural gas obtained by fracking in northeastern B.C. to a $40-billion LNG terminal on the province's North Coast for export to Asia.

The blockades set up this week are on the same disputed land that made international headlines in early 2020.

That's when several Wet'suwet'en hereditary chiefs and their supporters blocked access to Coastal GasLink pipeline worksites, sparking a nationwide discussion about who gets a say in resource development on land claimed as traditional territory.

The high-profile standoff led to RCMP raids to dismantle the blockade, which in turn sparked rail blockades across the country in support of the hereditary chiefs' cause. 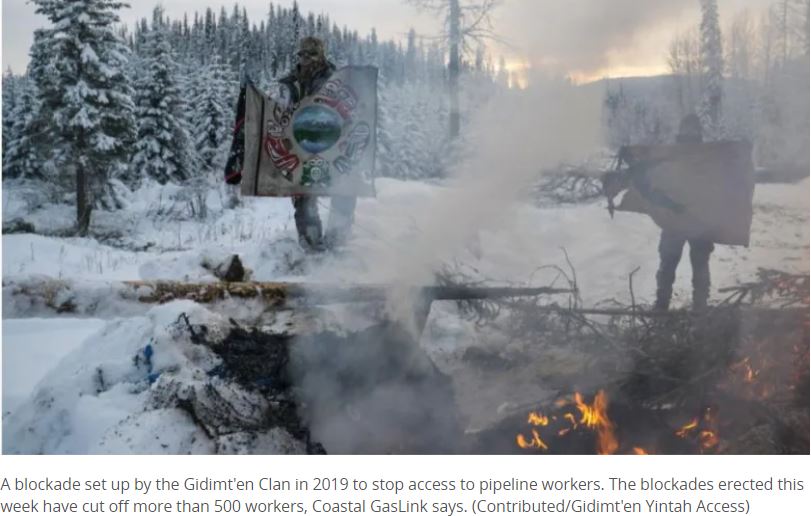