Keystone XL pipeline developers seek $15 billion for cancellation in one of biggest trade appeals against U.S. ever

Developers of Keystone XL are seeking to recoup more than US$15 billion in damages connected to President Joe Biden’s decision to yank a permit for the border-crossing oil pipeline even after construction began.

With a request for arbitration filed Monday, Calgary-based TC Energy Corp. formally opened one of the largest trade appeals ever against the U.S. and asked to put its long-running dispute over Keystone XL in front of an international arbitration panel. The legal claim is being mounted under provisions of the North American Free Trade Agreement that allow foreign companies to challenge U.S. policy decisions.

“The U.S. decision to revoke the permit was unfair and inequitable,” TC Energy said in its filing, blaming the U.S. for putting Keystone XL on a 13-year “regulatory roller coaster.”

The proposed pipeline, which would have transported up to 900,000 barrels per day of Canadian crude to U.S. refineries, was rejected by then-President Barack Obama after he concluded it would exacerbate climate change. Keystone XL was later revived by President Donald Trump, only to have Biden reject it again, on his first day in office.

While the new U.S.-Mexico-Canada Agreement that replaced NAFTA limited the use of so-called investor-state dispute settlement systems, arbitration is still temporarily grandfathered for some legacy investments.

TC Energy suspended construction on Keystone XL and terminated the project after Biden revoked its permit. TC Energy has no intention of reviving Keystone XL regardless of the outcome of the trade case, which is designed to recover the investment it lost pursuing the project under three U.S. presidents, said Richard Prior, the company’s senior vice president for liquids pipelines.

“We’re not doing this for symbolic or political purposes. This is a business decision,” Prior said in an interview. “We had all the permits and requirements in place to start construction on the line, and did so, and we worked with federal and state regulators in both countries for a very long period of time. This is just about recovering that destroyed value of investment.”

TC Energy accuses the U.S. of violating its obligations under NAFTA with actions by three administrations. The company said in the filing it agreed to abandoned an earlier NAFTA arbitration claim after the Trump administration promised “its third application would be fairly considered by the United States.” With its new filing, TC Energy also is renewing some of those earlier arguments tied to the Obama administration’s initial, 2015 rejection of Keystone XL.

The dispute goes before a three-member arbitration panel, with one likely appointed by TC Energy, a second appointed by the U.S. and a third appointed by agreement of both parties. The tribunal cannot compel a country to change its laws over the matter nor force approval of the pipeline, but it could award damages for lost profits and costs incurred by the company.

Such investor-state dispute settlement claims by corporations against the U.S. are relatively rare, and the U.S. has a good track record in winning them. However, companies have emerged victorious in similar international disputes. Most notably, in March, Germany agreed to pay US$2.9 billion to Sweden’s Vattenfall AB and other utilities, as part of a compensation package resolving a decade-long battle over the country’s decision to phase out nuclear power.

Biden’s decision to rescind a presidential permit his first day in office — without another round of government analysis on the long-studied project — gives TC Energy an “extremely strong case” under NAFTA language barring arbitrary discrimination, said Gary Hufbauer, a Washington-based senior fellow at the Peterson Institute for International Economics.

“TC has a great legal case going in,” Hufbauer said. “This was well out of the norm of customary government behavior.” 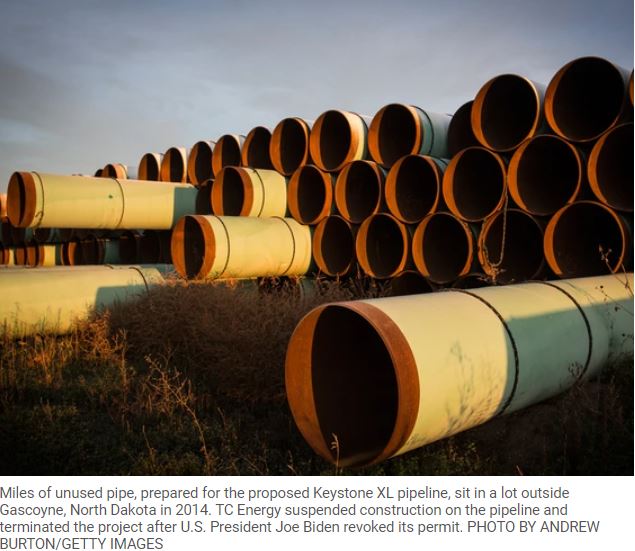