We could pursue policies that impact a critical U.S. export to Canada: digital services

Well, that was fast. On day one, the new U.S. president, Joe Biden, is reportedly willing to gut-punch his northern neighbour by cancelling a presidential permit for the construction of Keystone XL.

It is an insult. Full stop. Mineral fuels are Canada’s largest export to the U.S. — at over US$89 billion in 2019 — two-thirds more important than auto vehicles and parts. Almost 3,000 direct jobs and another 14,000 indirect jobs will be lost in Canada with the cancellation of Keystone XL. Because of reduced pipeline capacity, Canadian heavy oil will often sell at a discount, resulting in billions of dollars in lost GDP and federal and provincial tax revenues.

It will be a no-win decision for the United States, as well, if Biden goes ahead. The discrimination against Canadian oilsands production will lead to a loss of 42,000 direct and indirect jobs even as the pandemic recession rages on. When no longer piped, oil will travel by rail, which is less safe and environmentally more harmful. For every barrel of imported Canadian oil lost, the U.S. will import more heavy oil from other countries.

Who are the competing oil suppliers to the United States? In 2019, they included Mexico (US$12.3 billion), Saudi Arabia (US$11.5 billion), Iraq (US$7 billion) and Colombia (US$6.5 billion). These producers, as well as others, including Russia (US$3.5 billion) and Venezuela (US$1.4 billion), will be important beneficiaries from President Biden’s decision to cancel Keystone XL.

So why did he decide to discriminate against Canadian oil? The official reason is to combat climate change. But the latest oilsand technologies have reduced GHG emission intensity by over 30 per cent, so that new Canadian oil has the same GHG emission per barrel as other oil consumed in the U.S.

From a governance perspective and as a fellow democracy, Canada certainly stands up well compared with Saudi Arabia, Russia, Venezuela and Iraq. Do the Americans really want to buy oil from Venezuela and Russia — whose governments don’t like them very much — if they can buy it from Canadians instead?

On Sunday, TC Energy pledged that Keystone XL will be a net-zero emission project when it starts up by 2023. Promising to spend $1.7 billion on renewable power to operate the pipeline, the company said it would guarantee only union jobs will be offered. TC Energy has also enabled Aboriginal participation, with a $785-million stake.

By 2030 Canada’s climate change policies will include a carbon tax of $170, as well as new regulations and subsidies for emission reduction that go well beyond anything being planned in the United States. Given the substantial economic costs of both TC Energy’s plans and Canada’s climate policies, which together address substantive U.S. concerns, Biden’s cancellation of Keystone XL is particularly bewildering.

His decision will also steel opponents of Canadian pipelines in other settings. The most immediate case is Michigan’s attempt to revoke the easement for Enbridge’s Line 5 in the Straits of Mackinac. This obstruction could result in sharply higher gasoline prices in Ontario and Quebec, where Canadian elections are often won or lost.

So, what will the Liberals do in reaction? When Donald Trump imposed tariffs on Canadian aluminum, Canadians felt poorly treated by their supposed ally. Ottawa countered with tariffs on U.S. aluminum products, which were dropped after Trump revoked the U.S. tariffs a month later. Given the even greater importance of energy exports, Canada should not stand idly by now.

We could impose tariffs on selected U.S. oil-based products until the U.S. agrees to withdraw its cancellation of Keystone XL. That would mean higher prices for gasoline and heating oil, and so to a certain extent would be cutting off our own nose to spite our face. But we could get our message across loud and clear.

Better still, we could pursue policies that impact a critical U.S. export to Canada: digital services. There is a long list of retaliations that, unlike tariffs, would constitute sensible policies in this area. We could proceed immediately with “the Netflix tax” — GST/HST applied to imported digital services, which are currently exempt, unlike domestic digital services. Instead of waiting for the conclusion of the OECD’s interminable discussions about taxing the corporate income of multinational technology companies, we could go ahead with a French-style tax on Big Tech’s digital revenues. We could also pursue the Australian approach and require technology platforms to pay royalties to Canadian providers of internet content.

A more positive step would be to seek re-approval of Keystone XL within the context of a North American pact to achieve reliable, cheap energy and responsible energy development. Canada is in a strong position to provide all forms of energy, including electricity, to the U.S. market. And we should be harmonizing carbon policies to minimize trade distortions. At the same time, the U.S. would further its geopolitical goals by promoting North American energy sources rather than depending on less reliable foreign allies for imports.

Energy and pipeline development should be part of this agreement. Experts such as the International Energy Agency and Stanford modelling group have shown that oil and gas products, including plastics and hydrogen, will be needed even in a world with zero net emissions. Without further energy development, North American reserves will decline, resulting in the need to import more oil from other countries.

The biggest disappointment in all of this is Joe Biden. He says he wants to work with his allies but it appears that in one of his very first acts he will insult probably his closest ally of all. We should not sit on our hands in response. 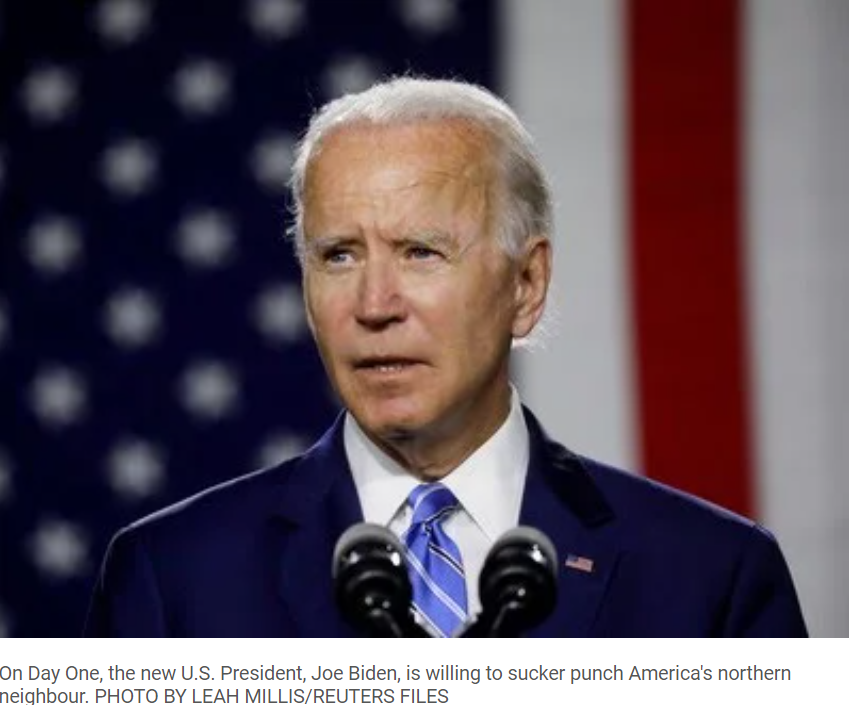