CAEPLA has for years now been warning that pipeline SECURITY is the most urgent threat facing landowners and industry.

Without fundamental recognition of and protection for Property Rights, pipeline landowners, their neighbours and energy transport companies are at deadly risk.

This threat is being trumpeted by an ICON of Canadian media and politics.

Yet no governments in Canada take this threat seriously.

Yet another reason why CAEPLA urges pipeline landowners to be aware, vigilant and active in defense of their property and of all our property rights. 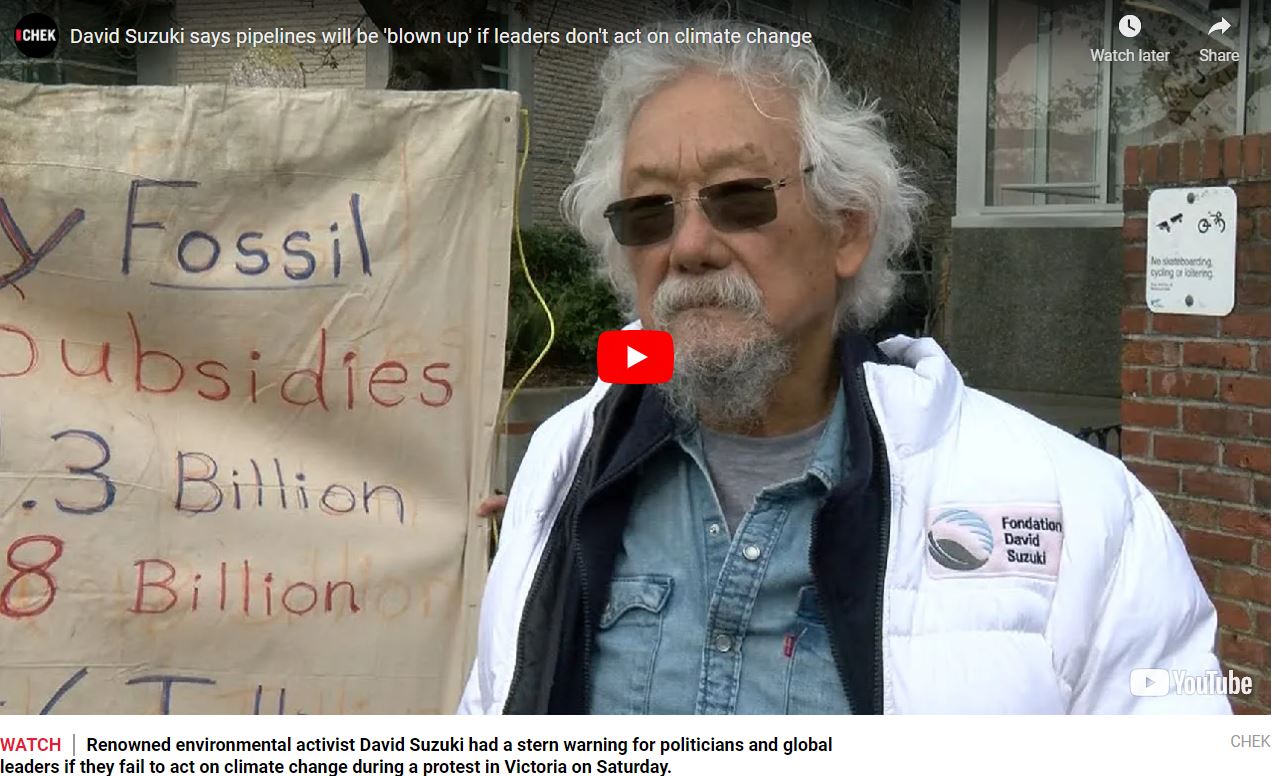 A renowned environmental activist has a stern warning for politicians and global leaders if they fail to act on climate change.

“There are going to be pipelines blowing up if our leaders don’t pay attention to what’s going on,” David Suzuki told CHEK News on Saturday without elaborating further.

The prominent environmentalist made the comments during an Extinction Rebellion Vancouver Island protest — called a Funeral for the Future — in downtown Victoria on Saturday afternoon. Suzuki was also at the group’s first event in the United Kingdom in 2018.

“I saw the power of civil disobedience,” he said, later adding. “People in Extinction Rebellion are saying we’re headed in a direction of extinction and we’re rebelling against it. That’s why I’m here.”

The event in Victoria saw hundreds march from Centennial Square to the B.C. Legislature, pleading with governments to do something about the ongoing climate emergency.

“It is now the age of consequences. We need action. We need a declaration of a climate emergency by this NDP government and we need them to begin to act with the reality of that emergency. We need changes in policy, no more investment in fossil fuel infrastructure,” said Dr. Don Goodeve, an organizer with Extinction Rebellion Vancouver Island.

The event also follows the recent COP26 climate change conference in Scotland, which organizers say fell short of what was needed, and days after devastating floods and mudslides that have continued to devastate many parts of British Columbia.

“What has just happened with the unprecedented rainfall and floods and Premier Horgan has the temerity to come back and say, well, six months ago, nobody could have predicted this,” said Goodeve. “Well, yes, they could. The scientists have been telling us for over 30 years that the consequences of unbridled expansion of fossil fuels and the continued investment in fossil fuel infrastructure, and not addressing the root causes of the climate crisis.”

Meanwhile, Suzuki said that British Columbia and the world is in “deep deep doo-doo” at this point unless serious action is taken to address the climate emergency. He said Canada needs to find alternative ways to living, suggesting that altering the food supply chain is one way to cut fossil fuel emissions.

“We cannot go on having a food chain that is 6,000 or 7,000 miles long,” he said. “We’re a northern country, why the hell are we able to buy fresh tomatoes and lettuce and fresh fruit 12 months a year? We’ve got to start living in a way that reflects the place that we live.”