'In one of the most concerning acts, an attempt was made to set a vehicle on fire while workers were inside'

RCMP are investigating what is being described as a “organized violent attack” on pipeline workers, police and equipment at a Coastal GasLink drilling site near the Morice River in northern British Columbia.

Mounties were called for reports that 20 masked people, some of them wielding axes, had attacked security guards at the work site near Houston, B.C., shortly after midnight Thursday, smashing the windows of their vehicle.

“This coordinated and criminal attack from multiple directions threatened the lives of several workers,” TC Energy Corp., the company building the Coastal GasLink pipeline, said in a statement.

“In one of the most concerning acts, an attempt was made to set a vehicle on fire while workers were inside. The attackers also wielded axes, swinging them at vehicles and through a truck’s window,” the company said. “Flare guns were also fired at workers.”

Initially RCMP were told that some of the workers were trapped at the site, but all nine employees managed to escape safely and without any injuries.

“Workers fled the site for their own safety and remain shaken by this violent incident,” the company said.

Millions of dollars in damage was also done to heavy equipment and construction trailers on the site, according to details provided by police and the company. “Equipment hydraulic and fuel lines were also cut, causing dangerous leaks,” TC Energy said. “We are working to contain and clean up the environmental damage caused by the attackers.”

The company called the incident a “highly planned and dangerous unprovoked assault.”

RCMP officers approaching the site from the Marten Forest Service Road said they encountered a burning blockade of downed trees, tar-covered stumps, wire and boards with spikes driven through them.

“As police worked their way through the debris and traps, several people threw smoke bombs and fire-lit sticks at the police, injuring one officer,” RCMP said in a release.

An old school bus also had to be cleared from the roadway by RCMP and Coastal GasLink workers before police officers could reach the worksite.

“This is a very troubling escalation in violent criminal activity that could have resulted in serious injury or death,” RCMP Chief Superintendent Warren Brown said in a statement Thursday.

“This was a calculated and organized violent attack that left its victims shaken and a multimillion dollar path of destruction. While we respect everyone’s right to peacefully protest in Canada, we cannot tolerate this type of extreme violence and intimidation. Our investigators will work tirelessly to identify the culprits and hold them accountable for their actions.”

The Coastal GasLink pipeline, which will connect B.C.’s shale gas resources to LNG Canada’s export project in Kitimat, is almost 60 per cent complete.

B.C. Public Safety Minister Mike Farnsworth condemned the violence Thursday evening, describing it as “egregious criminal activity” that could have led to serious injury or loss of life.

“There is no excuse for such violence and intimidation,” Farnsworth said in a statement. “All workers deserve to be protected from harassment and harm.”

RCMP have not yet made any arrests and are urging anyone with information to come forward.

The site of Thursday’s attack is in an area that has been a flashpoint for past blockades and protests by opponents of the pipeline, including supporters of the hereditary chiefs of the Wet’suwet’en First Nation, a northern B.C. First Nation that comprises both elected and hereditary chiefs.

Coastal GasLink has government approval for construction and the support of elected councils for the Wet’suwet’en people and agreements with all 20 elected First Nation councils that span the pipeline’s 670-kilometre route.

However, some members and supporters of the hereditary chiefs of the Wet’suwet’en have been vocal in their opposition to the project and have said they do not consent to the pipeline crossing Wet’suwet’en territory.

A blockade of a forestry road by a group of hereditary chiefs and supporters, which led to a standoff with RCMP in January and February 2020, attracted international attention. The incident inspired further protests across Canada, including the blockading of railway lines. Federal and provincial ministers met with the hereditary Wet’suwet’en chiefs in a bid to resolve the matter — a meeting which ultimately led to the parties signing a memorandum of understanding to begin work on an agreement to affirm Wet’suwet’en title and rights and address other jurisdictional matters.

Work has continued on the Coastal GasLink pipeline in the interim.

Last November, the road was blockaded again for 59 days by members of the Gidimt’en clan of the Wet’suwet’en Nation, temporarily stranding some 500 Coastal GasLink pipeline workers at a remote work camp. 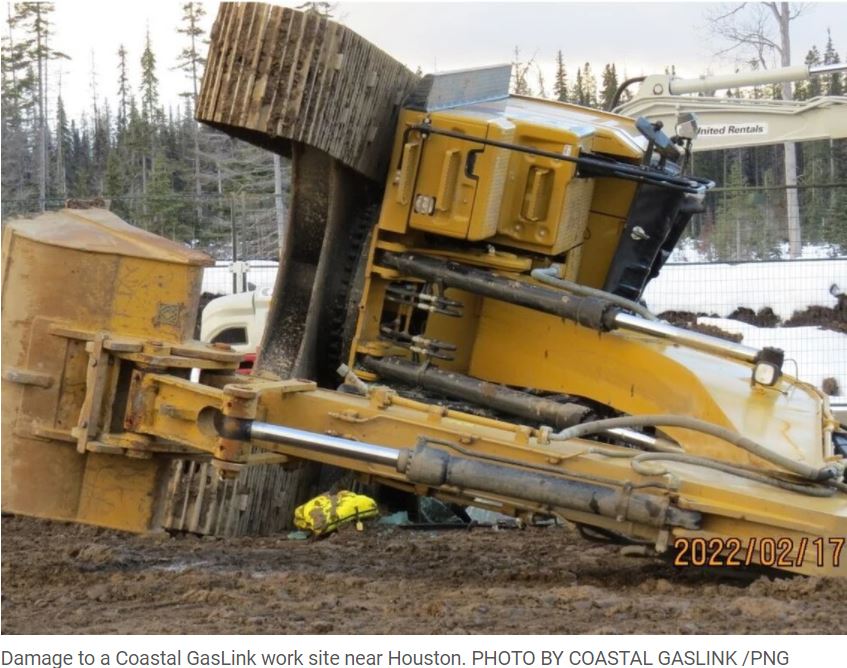