CALGARY — Canadian oil producers may soon enjoy higher prices for the crude they sell into the U.S. as a major south-to-north pipeline is in the final stages of a reversal — an under-appreciated event that could lift the prospects of the domestic oil industry.

Capline was the largest south-to-north flowing pipeline in the United States with a capacity of 1.2 million barrels of oil per day, but owner Marathon Petroleum has been working to reverse the flow since 2017, which would allow both heavy and light oil to flow from a storage hub in the U.S. Midwest to a major refining centre on the Gulf Coast. The company website notes that the reversal will be completed this year.

“They’re doing line fill right now,” BMO Capital Markets analyst Randy Ollenberger said of the Capline, adding that he expected the pipeline to shrink Western Canada Select discounts relative to West Texas Intermediate oil prices to US$10 per barrel. A barrel of WCS traded up 1.67 per cent Thursday to US$67.08, which implies a US$15.50 per barrel discount relative to the WTI price of US$82.58 per barrel.

“We don’t know who has contracts on the Capline, but we do think that everybody benefits in the sense that the spread comes in. You don’t have to be physically shipping on the Capline to benefit,” Ollenberger said, adding that he expects to see the impact of the line on the bottomlines of Canadian producers in the second quarter of 2022.

Oil producers contacted by the Financial Post said they expected the project would improve the returns of their barrels.

“I’m excited about it. I think the Capline reversal would certainly be a positive for Canadian producers and improve pipeline optionality, specifically for the heavier producers, but it’ll de-weight the entire pipeline system in Canada,” Grant Fagerheim, president and CEO of Whitecap Resources Inc., told the Financial Post, referring to problems where Canadian oil exports have exceeded pipeline capacity in the past.

Fagerheim said he would look at using the Capline to move more of his company’s oil to the U.S. Gulf Coast, adding the option of delivering oil to either the U.S. Midwest or the U.S. Gulf Coast provides some “insurance” for the oilpatch by providing a diversity of markets.

To use the Capline, Canadian oil producers will need to ship their crude on Enbridge Inc.’s Mainline pipeline system to the U.S. Midwest, and then switch to the Enbridge’s Southern Access pipeline connected to the Patoka oil storage hub, which provides direct access to the Capline and a straight shot to the refineries of the U.S. Gulf Coast.

The Capline reversal is coming into service in tandem with Enbridge’s 760,000-bpd Line 3 replacement project, which the Calgary-based pipeline giant completed in September and is now fully operational. The Capline rates range from $1.75 per barrel for shippers committing to move more than 100,000 barrels per day on the line to $3.75 per barrel on a spot basis.

For years, Canadian oil producers sold the majority of their barrels to refiners in the U.S. Midwest. TC Energy Corp.’s Keystone XL pipeline was proposed as a way to reduce the dependence on that market by taking 830,000 bpd directly to the U.S. Gulf Coast, which is home to the world’s largest concentration of heavy oil refineries.

At times when gasoline demand in the Midwest declined or refineries in the region were offline for maintenance, the Canadian heavy oil barrels, called Western Canada Select, suffered large — sometimes as high as US$40 per barrel — discounts relative to West Texas Intermediate benchmark.

The Capline reversal functions like a “mini Keystone XL,” said Rory Johnston, managing director and market economist at Price Street in Toronto, adding that it would provide oil producers the option to ship to the Midwest or the Gulf Coast.

“On its face, I don’t think it should have a direct narrowing impact (on WCS/WTI differentials) because it’s not really increasing egress from (Alberta) proper, but there is a pretty robust monopsony and buyer concentration for Canadian players in the U.S. Midwest,” Johnston said.

“It reduces the likelihood of big, big blowouts should you see issues like heavier maintenance (in the Midwest region) , for instance,” he said.

“This will certainly help to keep the differentials tighter than what we’ve seen in the past because you’ll have more egress optionality out of Western Canada,” said Martin King, senior analyst with RBN Energy, adding he expected the reversal could help differentials trade within the US$12 per barrel to US$14 per barrel range.

Marathon did not respond to a request for comment on when the reversed Capline would begin flowing large volumes of heavy crude oil. The project is scheduled to begin shipping small volumes of light oil this year, followed by heavier blends in 2022. 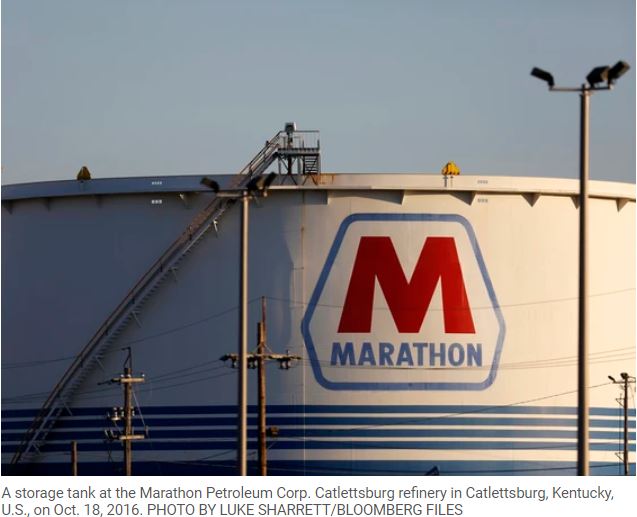