Canada’s oil bust has left thousands of orphan wells, and not enough money for cleanup

Orphan wells are indeed a problem.

One created by an incompetent regulatory regime.

CAEPLA is currently working with landowners and industry to find solutions.

Property rights, the best science, and the goodwill of all those involved will provide a way forward. 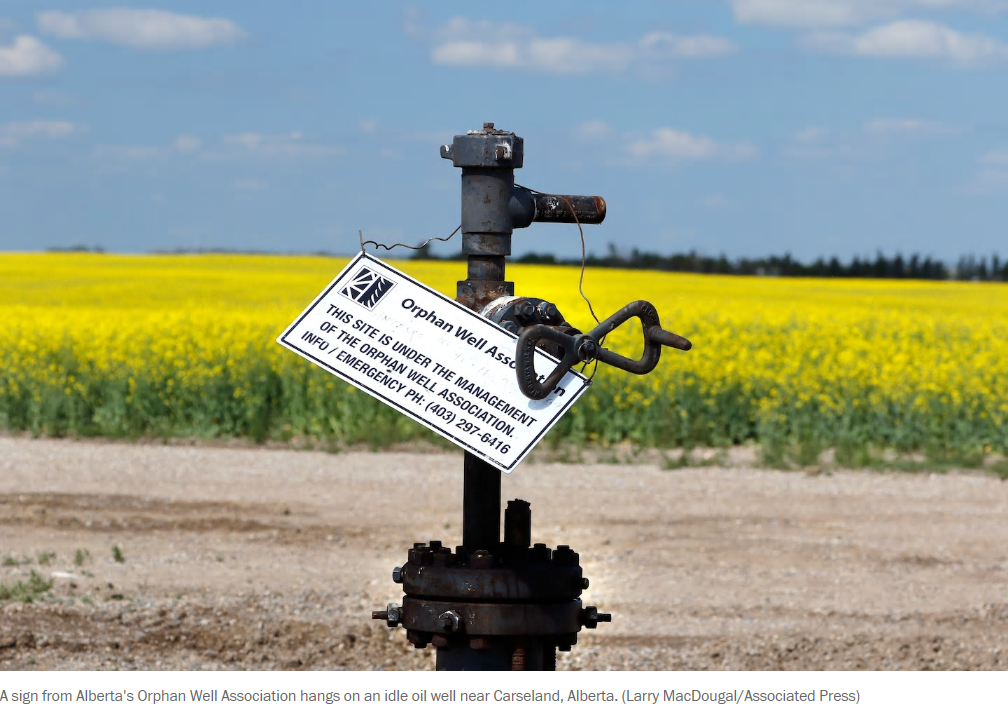 Greg Latimer’s ranch near Sounding Lake, Alberta, has 4,000 acres, 350 head of cattle — and more than a dozen idle or orphaned oil and gas wells.

Latimer, who took over the family ranch in the southeastern part of the oil-rich province in 2011, worries about leaks contaminating the groundwater and soil. He believes his cows have fallen ill after drinking from puddles near the wells. He and his partner, Marva Coltman, get headaches from the odors that some of those wells emit.

Neither Latimer nor his father or grandfather was given a choice about whether to let oil and gas companies onto their property. With rare exceptions, landowners in Alberta own rights to the surface, but not to the minerals that lie beneath.

For decades, a quid pro quo of sorts kept both sides relatively content. Landowners don’t get royalties, but the oil and gas companies that drill on their properties owe them rents — as much as $3,375 per well per year.

But as companies in the Alberta oil patch struggle to stay afloat after a 2014 slump in crude prices, the pact is unraveling — leaving landowners chasing vanishing rental payments and taxpayers on the hook for cleaning up after the “orphan wells” left behind by companies that couldn’t make it.

“My grandfather came here in 1911 in the middle of the country to make a homestead,” Latimer said. “These guys came here and destroyed it. It isn’t fair.”

The growing ire in the prairie heartland has put Alberta Premier Jason Kenney in a bind, between the interests of the rural Albertans who voted in droves for his United Conservative Party in last year’s provincial election and those of the energy sector, the engine that drives Alberta’s — and Canada’s — economy.

“Farmers and ranchers are the biggest supporters of the oil and gas industry,” said Keith Wilson, an Alberta lawyer who represents landowners. “They have been quiet and good partners, but it’s reaching a boiling point.”

Under provincial law, oil and gas companies are responsible for plugging defunct wells and restoring the environment to its pre-drilling state. When the operators are bankrupt or insolvent, the wells are transferred to the industry-funded Orphan Well Association, which is tasked with decommissioning them.

As the energy sector has struggled, the association’s inventory has ballooned, from 162 wells in 2014 to 3,406 today — the rusting and cobwebbed vestiges of a bygone era.

And the number could skyrocket, soon. Last year, both Trident Exploration and Houston Oil & Gas bit the dust, leaving behind a combined 6,100 wells and a $307.9 million cleanup bill. Wells that can’t be sold will be added to the inventory.

Albertans worry that many of the province’s 90,000 inactive wells — those that are no longer pumping but haven’t been plugged — could become orphans, too, as their operators struggle.

In its 2018-19 annual report, the Orphan Well Association said it cost an average of $25,500 to decommission a well, but acknowledged that some cost more. Lars DePauw, the association’s executive director, says it cleaned up more than 800 sites last year.

The province lent the association $176.3 million in 2017; the federal government provided $22.5 million of that loan. Now Kenney’s government is asking Ottawa for more help.

Alberta, unlike several U.S. jurisdictions, does not require companies to post upfront security deposits for cleanup before drilling, or impose mandatory timelines for cleaning up inactive sites. Lucija Muehlenbachs, an economist at the University of Calgary, said this incentivizes operators to keep them inactive to avoid the costly cleanup. Few are put back into production, she said, even when energy prices rebound. And struggling operators sometimes sell their high-liability wells to smaller companies, who are also strapped for cash.

“They change companies so fast, I can’t keep up,” she said.

The industry-funded Alberta Energy Regulator, an arm’s-length watchdog agency of the provincial government, has a system that’s supposed to ensure companies that drill have the financial wherewithal to clean up their wells in the future. If a company’s estimated assets are less than its estimated liabilities, it is supposed to put up a security deposit.

In the months before Trident Exploration ceased operations, for instance, the company’s ratio would not have required it to put up a security deposit, according to the Alberta Energy Regulator’s figures.

As of December, the energy regulator had $170.3 million to clean up potential oil and gas liabilities estimated at more than $22.5 billion, the figures show.

A bid for Trident assets closed in December. Tom Pavic, a senior vice president with Sayer Energy Advisors, which is helping PricewaterhouseCoopers, the receiver, with the sale of the wells, said it was too soon to know how many have been sold to other companies. Ember Resources has agreed to take on more than1,130 Trident wells, assuming $86.3 million in liabilities, according to court documents.

Alberta’s auditor general has launched an investigation into whether the regulator’s processes for dealing with orphan wells are sustainable.

“Environmental liability is a core area that we see as a significant risk across the board,” said Val Mellesmoen, an executive director for the auditor general. “It not only represents financial risk, but also environmental risk and risk to public safety.”

The audit is expected to be completed by early 2021.

A spokesman for the energy regulator said the liability management ratio was inadequate.

“Taken on its own, [it’s] not a good indicator of a company’s financial health,” spokesman Shawn Roth wrote in an email. “We are working to broaden our assessment processes to allow for a more holistic assessment of a company’s ability to address its end-of-life obligations.”

Kenney’s government did not initiate the auditor general’s probe, but a spokesman for the Energy Ministry said it welcomes it. Provincial Energy Minister Sonya Savage will introduce new measures to address the problem of orphan wells this year, spokesman Kavi Bal said. He did not provide details.

Nelson says the wells on her farm are more than an eyesore. They make it difficult to maneuver farming equipment. Some of the wells were owned by operators that “disappeared off the map,” she said, without cleaning up their mess.

Nelson, who has Houston Oil & Gas wells on her property, says she wasn’t surprised when the company went under: It had stopped paying rents several months earlier.

Houston and its receiver, Hardie & Kelly, declined to comment. A bid for the company’s wells closes Feb. 27.

If a firm is delinquent on its rent payments, landowners can file an application with Alberta’s Surface Rights Board, a quasi-judicial tribunal charged with resolving disputes between landowners and operators. It compensates landowners with taxpayer money that the province is supposed to recoup from oil and gas operators.

But the tribunal is backlogged with complaints, leaving landowners waiting months and sometimes years for action. In 2019, the Surface Rights Board received 3,678 rent-recovery applications — a sevenfold increase from the 505 applications it received in 2014, when oil prices began to decline.

Bal, the Energy Ministry spokesman, did not respond to a question about how much of that compensation has been recouped.

Daryl Bennett, the head of the landowner advocacy group Action Surface Rights Association, has encouraged farmers and ranchers to cut power to the wells of companies that have defaulted on their payments.

“If your business model is to exploit the resource and then run away, that’s a poor business model,” he said. “They shouldn’t be drilling those wells if they don’t have the financial capacity to take care of the obligations in the business.”

“It’s no different than kids playing with their toys and ­going and starting something else without cleaning up what said they’ve already made a mess of,” said Coltman, from the ranch near Sounding Lake.

Trident cited it as one reason it was ceasing operations. The company said the ruling “had the unintended consequence of intensifying [its] financial distress and accelerating unfunded abandoned well obligations.”

But that’s not sitting well with landowners.

“Something is going to have to give,” Nelson said.