Canada’s Natural Resources Minister Seamus O’Regan says the government is continuing to “make the case” for the Keystone XL pipeline expansion despite reported plans from Joe Biden to immediately quash the project.

His comments come on the heels of reports that Biden is planning to cancel the planned pipeline expansion as one of his first moves after becoming U.S. president on Wednesday.

Transition documents, which The Canadian Press has seen, show that one of his to-do list priorities for inauguration day includes a plan to rescind the Keystone XL construction permit granted in 2019 by predecessor Donald Trump.

“Our government’s support for the Keystone XL project is long-standing and well-known. And we continue to make the case for it to our American colleagues,” O’Regan said in a statement sent to Global News.

“Canadian oil is produced under strong environmental and climate policy frameworks, and this project will not only strengthen the vital Canada-U.S. energy relationship, but create thousands of good jobs for workers on both sides of the border.”

He added that workers in Alberta and across Canada “will always” have the government’s support.

Meanwhile, the reaction in Alberta to the news has been explosive. Alberta Premier Jason Kenney’s government invested $1.5 billion into the project last year, and on Monday he slammed Biden’s plan to shut the door on the pipeline’s expansion.

“That would be, in our view, an economic and strategic error that would set back Canada-U.S. relations with the United States’ most important trading partner and strategic ally: Canada,” Kenney said during a Monday press conference.

“All we ask at this point is that president-elect Biden show Canada respect to actually sit down and hear our case about how we can be partners in prosperity, partners in combating climate change, partners in energy security.”

Kenney has also said his government is prepared to use any legal avenues it can to protect its interest in the project.

Canada’s ambassador to the United States, Kirsten Hillman, has also weighed in on the planned cancellation of the pipeline project, imploring the soon-to-be Biden administration to reconsider the plan.

“This infrastructure will safely transport Canadian crude oil that is produced under one of the strongest environmental and climate policy frameworks in the world, and will strengthen the vital Canada-U.S. energy relationship,” she said in a statement issued over the weekend.

“My team and I will continue to work with Alberta and the industry to make sure American lawmakers and stakeholders understand the facts about energy production in Canada, and that KXL will strengthen US energy security safely, sustainably and responsibly.”

However, not all Canadians were aghast at the decision. Green Party Leader Annamie Paul applauded Biden’s planned move on Monday, urging the feds not to push back.

“We have a real chance, because this is a…president-elect who has made it very clear that the climate is going to be on the top of his agenda.”

“We should be working with the United States…rather then pushing them to reverse the commitment to end the Keystone pipeline.”

“I support the decision, because I know that this is the direction that the future requires,” Singh told reporters.

“We’ve got to fight the climate crisis.”

Biden has yet to formalize the decision to kill the project, meaning the government has at least two more days to change the new administration’s mind. That’s exactly what they intend to try to do, O’Regan said, in addition to hitting the ground running in working with the new president.

“We’re looking forward to working with the incoming Biden administration and further strengthening the relationship with our closest ally.”

With files from The Canadian Press and 630CHED’s Kirby Bourne 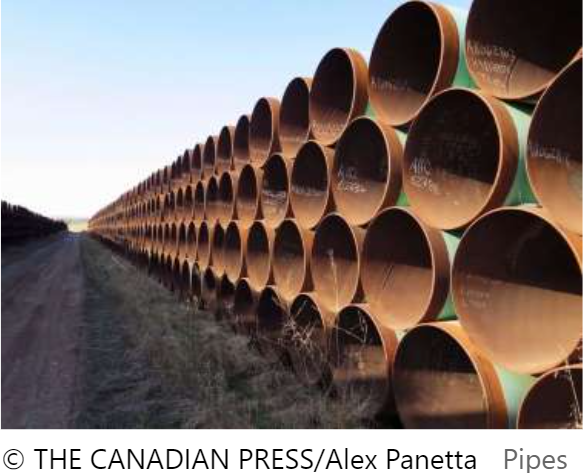