Canada's leading grassroots property rights organization calls for abolition of NEB and an end to Right of Entry, says C69 makes energy regulation worse than ever...

I am responding to your office’s email, dated April 29, 2019 requesting if CAEPLA has a published official position on Bill C–69.

CAEPLA considers Canada's almost three quarter century experiment in energy regulation to have been a failure.

For the majority of this period, the National Energy Board, via expropriation on behalf of industry, has effectively suspended the property rights of farmers, ranchers and other landowners who found themselves in the path of energy transport projects -- all under the pretense of protecting the public.

Fast forward to today and landowners are no better off.  The only change over the last decade has been that the Board, long captured by industry, has been further politicized and in fact captured by environmental extremists, such that the property rights of energy transport investors have also now been suspended.

CAEPLA has arrived at the view that the National Energy Board must be abandoned and not replaced.  Instead, the energy transport sector should be governed by property rights and contract law.

We believe industry and most Canadians will one day come to share this view of how things ought to be.  Property rights are the best mechanism by which to protect landowner and industry interests, as well as public safety and the environment.

However, until that day when industry and Canadians agree that recognition of and respect for property rights is a priority, CAEPLA strongly opposes the new power of government in Bill C-69 to facilitate the entry onto private property of private nongovernmental actors who may have interests that conflict with the interests of landowners.  Both under the proposed Impact Assessment Act (Section 122(3)) and the Canadian Energy Regulator Act (Section 103(5)), designated enforcement and inspection officers would have authority to bring with them onto private property “any other person that they believe is necessary to help them perform their duties and functions”.  And Section 114 of the proposed Impact Assessment Act appears even to empower the Minister of the Environment to make agreements with “Indigenous governing bodies” giving such bodies authority over privately-owned lands.  CAEPLA is aware that National Energy Board inspection officers have already facilitated the entry onto private lands of Indigenous “monitors” seeking to carry out unauthorized archaeological investigations, notwithstanding that the current legislation contains no authority to do so.  Landowners are extremely concerned that Bill C-69 is the government’s pathway to allowing Indigenous and special interest actors access to private lands for the purpose of restricting or usurping the rights of ownership and restricting future land use through the guise of regulating federal projects.

CAEPLA also continues to advocate for the elimination of the power of expropriation for federally-regulated energy projects.  The power of the National Energy Board to grant Right of Entry to companies (to be continued in the proposed Canadian Energy Regulator Act) is the power of government to force energy and pipeline projects on landowners on the terms and conditions decided by the regulator and companies, without regard for property rights.  CAEPLA submits that the power to grant Right of Entry (Section 324), and any powers of companies to access lands without landowner agreement (including in Section 313), should be eliminated in the proposed Canadian Energy Regulator Act so that landowners may grant land rights necessary for projects on reasonable terms and conditions to be negotiated with companies on an even playing field.  Just as government should not use its power to regulate federal projects to get Indigenous and other special interest actors onto private lands, government should not be a mechanism by which energy companies dictate the terms and conditions on which they take the rights of landowners.  Landowners want to negotiate fair and reasonable agreements for projects – government needs to get out of their way.

P.S.   CAEPLA has also referenced its concerns in the attached letter dated March 21, 2019 to the NEB. I am also attaching the NEB’s response to that letter dated April 18, 2019.

P.S.S.  In addition, CAEPLA references these concerns in the Spring 2019 Pipeline Observer, page 4 – 6, that has been mailed to every Senator. 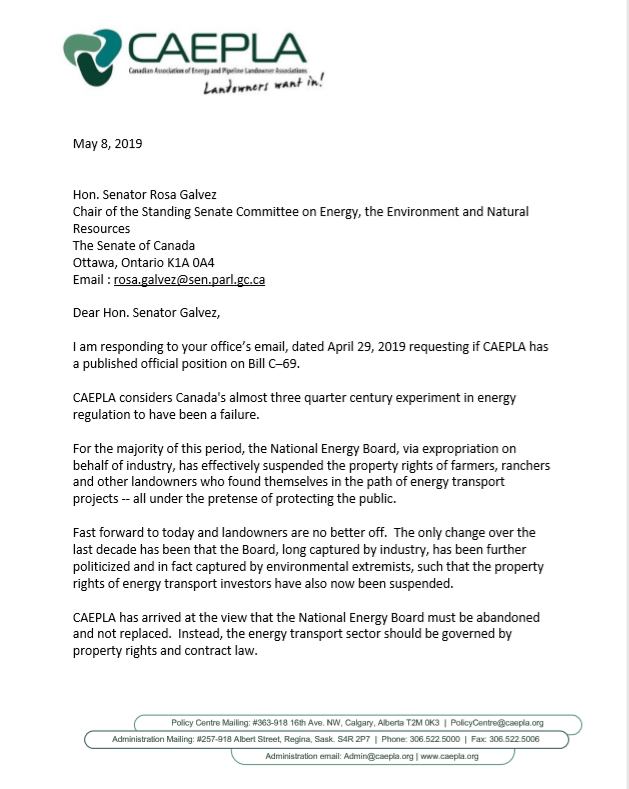 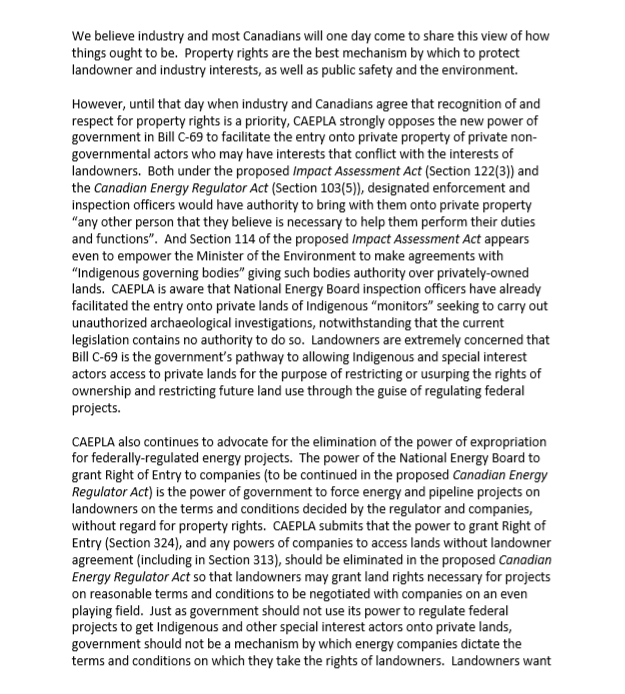 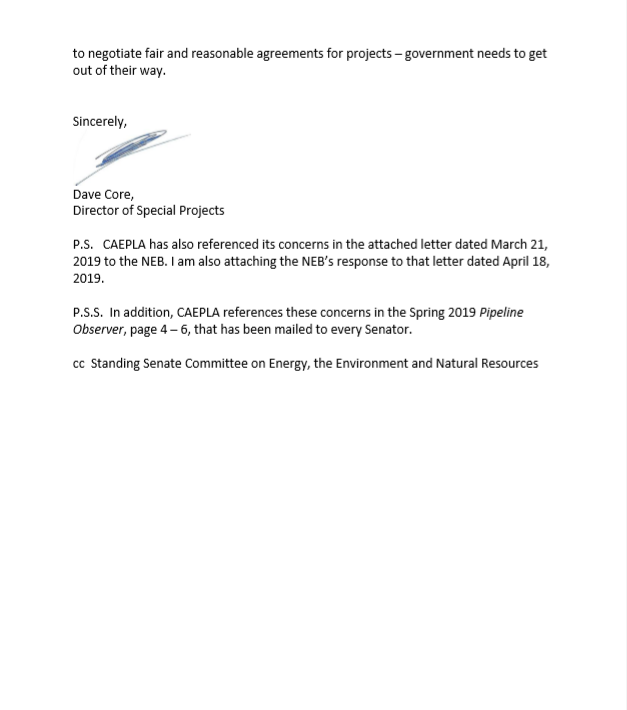